A baby was found alive but in critical condition inside a wrecked car in Utah Saturday, 13 hours after the car the child was in plunged into a river, police said. The child’s mother was found dead in the car when an fisherman discovered the crashed vehicle at around 12:20 p.m. Saturday afternoon.

Police believe the car hit a cement barrier on a bridge at around 10:30 p.m. Friday night and ended up in the Spanish Fork River in Spanish Fork, a city of around 37,000 people south of Provo.

The 4-door Dodge was upside down and resting on its roof and the 18-month-old girl was found locked in a car seat in the rear passenger seat, police said. The baby’s 25-year-old mother was dead in the driver’s seat when first responders arrived, Spanish Fork Police said in a statement. (Read more about the horrific car crash HERE) 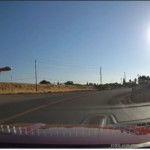