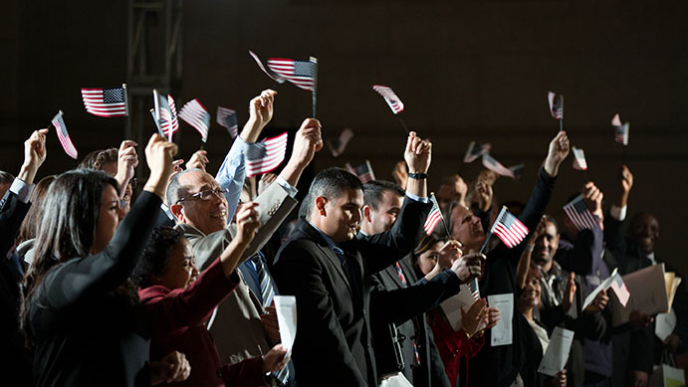 On Friday, the legacy media successfully turned the focus away from the heartbreaking stories of families who have been permanently separated from their loved ones because of crimes committed by illegal immigrants and instead focused on how narcissistic President Trump supposedly is.

At an event at the White House hosting 11 “angel families” whose relatives suffered gruesome deaths at the hands of illegal immigrants, the president signed large photographs of the young victims. According to Trump’s detractors, that made him a “sociopathic ghoul,” as one person tweeted.

“He really will put his name on anything,” writer Johnny McNulty tweeted.

Entire articles were written about the furious fallout from the event caused by Trump’s signatures on the children’s photos. But apparently none of these people felt compelled to ask: Did these families want Trump’s signature on the photos of their deceased loved ones?

An article in The Hill stated definitely, “It is unclear when Trump autographed the images or if the families requested it.”

Well, it would have been pretty clear had The Hill writer simply asked. But since no one else was willing to, we did.

Sabine Durden, who lost her son Dominic in a fatal vehicle accident caused by an illegal immigrant in California, told CRTV: “I asked [President Trump] myself if he would please do me the honor to sign [my son’s] picture. He gladly agreed and obliged. The other Angel parents also asked for his signature on their poster.” She said, “It’s a true treasure to me. How very sad that [President Trump’s] signature on our pictures is now an issue instead [of] the reason why we only have pictures left.”

Chris Stansberry, who lost his daughter Tierra in a fire prosecutors allege was set by an illegal immigrant, told us that “all of us families ask[ed] President Trump to sign” the photos.

“It has nothing to do with his ego,” said Laura Wilkerson, a mother whose son Joshua was tortured, beaten to death, tied up, and set on fire by an illegal immigrant. She added that all the families would “much rather be at home with our children and never know President Trump.”

Steve Ronnebeck’s son Grant was shot and killed over a pack of cigarettes. The accused killer is an illegal immigrant. He also confirmed to CRTV that the families asked Trump to sign their pictures. “The President did not offer,” he told us. “He was requested to sign them.”

On Friday night, White House social media director Dan Scavino Jr. clarified on Twitter that the Trump autographs were “REQUESTED by family members after their private meeting and visit to the Oval Office.”

REQUESTED by family members after their private meeting and visit to the Oval Office – which took place before public remarks, as seen in the Eisenhower Executive Office Building, below. https://t.co/vP0ac11YpD

But the incurious media ignored his tweet, continued promoting a false narrative, and distracted from the real separation stories and the true immigration crisis: illegal immigrants and the sanctuary cities that harbor them.

“You know you don’t hear these stories, and some of our media won’t talk to you about it, but this is permanent separation,” Ronnebeck said at the event Friday.

If more were willing to cover these stories – instead of made-up stories about Trump’s ego – we might have a shot at starting to mend the permanent family separation crisis that plagues the nation. (For more from the author of “Parents of Kids Killed by Illegal Aliens: We Asked Trump to Sign Photos of Our Children” please click HERE)

Socialist Logic: Raising Taxes Will Pay for Everything for Everybody