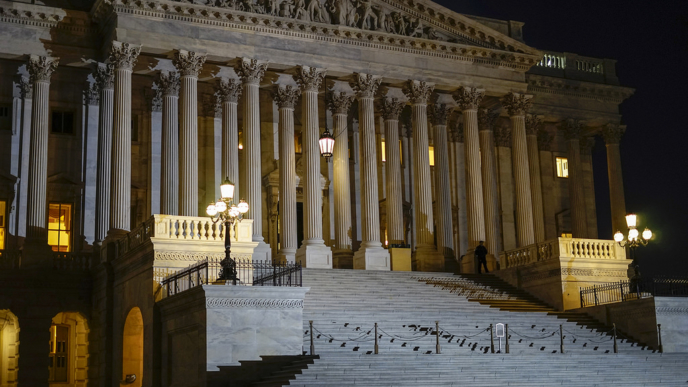 Last year, I made a list of 25 slam-dunk immigration bills that the Senate should consider on the floor to show that Democrats care more about illegal immigrants than about Americans. Over the past month, with the national focus finally turning to immigration as the top issue, McConnell should have been holding one vote after another on these issues. Instead, he was dead silent. Now he is scheduling two votes for Thursday – one on an amnesty bill with border funding, and the other on the Democrat bill to fund government without fixing the border invasion. Thus, rather than trying to throw a touchdown, he is either tossing an interception or an incompletion. Why not vote on something good?

When Trump announced his amnesty offer, many conservatives downplayed the concerns about the bill by noting that Democrats would reject it anyway, all part of a Trump chess plan to expose their radical intransigence. The problem, as I noted on Monday, is that “once Trump officially blesses the idea of amnesty in this context, Senate Republicans will run with this. They will allow Democrats to negotiate down further, and we’ll be left with a few billion dollars, no policy changes to fix a policy problem, and a new amnesty.”

Now, based on the text of the legislation introduced, there is not such a concern that the amnesty bill will actually pass, because it does contain at least a few good provisions that Democrats will never support. However, McConnell is unwisely allowing a side-by-side vote – together with Trump’s proposal – on a Democrat bill that would fund all of government through February 8 without any immigration fixes or border funding.

Ultimately, not only is this broader strategy bad messaging and alleviates the pressure on Democrats, who are radically out of touch with the American people on illegal immigration, it might give Democrats an outright victory.

A slippery slope to getting nothing on the border … or worse

The first vote on Thursday will be on a $354.5 billion omnibus package (H.R. 648) that funds the seven departments currently unfunded for the remainder of fiscal year 2019. The bill contains an extra $12 billion in disaster aid, as we well as the president’s request for 234 miles of border fencing, more detention beds, hiring more ICE and Border Patrol, and more technology funding at and between points of entry. The problem is that this bill also adds amnesty for Obama’s DACA aliens plus 300,000 illegal aliens who are illegally given temporary protected status. The bill also keeps the language from last year’s omnibus barring Trump from using the original prototype for any part of the new wall.

Finally, the Senate bill doubles the H-2B visa cap for what is essentially non-agriculture slave labor, a provision that was not in the White House outline. This should reveal to all of us the true motivations of many Senate Republicans and why they are still not serious about stopping illegal immigration. They actually like illegal immigration because it keeps the labor trafficking for their donors flowing.

The final text of what is being dubbed “the Trump deal” does contain some tightening of asylum. It requires that Central American teenagers designated as UACs only apply for asylum outside America. This would be an awesome reform if it applied to everyone. The problem is that the bill bizarrely targets only UACs for asylum reform, when the UACs have their own loophole, which is not directly fixed in this bill. They don’t use asylum. It’s the family units that abuse asylum and can still do so under this bill.

Nonetheless, because of this and several other provisions, almost no Democrat will touch this bill with a 10-foot pole. It won’t pass the Senate.

It would be one thing for conservatives to vote for this amnesty bill and then, after it’s voted down, proceed to dozens of important bills targeting illegal immigration. But McConnell has offered Democrats a second vote. They will vote on the Democrats’ House bill that would continue funding for all of government at existing levels through February 8, with no border fix.

The conventional wisdom is that both bills will fail, more or less along party lines. However, if you add up the number of Republicans who are terrified of the shutdown and who never really cared about the border to begin with, it’s not hard to understand how McConnell is playing with a forest fire here. It would be one thing if the Democrat bill lasted until the end of the year. That would be a capitulation too far for most Republicans. But it’s easy to see a scenario where enough Republicans say, “Look, we need to get government back up and running. This is only for a few weeks and this will allow us to negotiate without such collateral damage.”

Of course, were that to happen, our leverage is gone until after the next election.

This is all the more likely if the Democrat CR vote takes place after the Trump bill gets defeated and the RINOs could then say, “This is our only choice.” Even if it fails to get 60 votes, if Democrats can peel off five to ten Republicans, it will really give momentum for a clean cave, or worse.

Axios is reporting that Jared Kushner and Sen. James Lankford, R-Okla., both big proponents of amnesty, are working to push permanent amnesty. They want to “go big.” Remember, too many Republicans support amnesty, even as a stand-alone without anything in return. Certainly, they’d support it for a few billion in border funding and for an escape from this shutdown, which they view as a living hell. This became the problem the minute Trump changed course from demanding enforcement votes and made this about some form of amnesty. As we’ve noted many times before, if all we get for amnesty is mere border funding and no policy changes, we should just open up the government for nothing. An incompletion is better than an interception.

A better way forward for Trump

Why not attempt a touchdown? Rather than offering amnesty as a way of “exposing” Democrat intransigence, thereby risking a runaway train with liberal Republican senators, Trump should marginalize Democrats with a demand to pay our law enforcement agents – Border Patrol, ICE, FBI, DEA, TSA, and the Coast Guard – until a full funding bill can be crafted.

Next, Trump should demand McConnell hold votes on a bill to cut off the magnets for illegal immigration. “Pay our agents, not the cartels.” There should be a bill named after Ronil Singh, the police officer killed by a known criminal alien, to mandate immediate apprehension and deportation of all criminal aliens and cut off funding to any locality that fails to turn over illegal aliens arrested for gang activity and other crimes, including DUIs and drug trafficking. Singh was killed by an illegal alien gangbanger who was arrested twice for DUI but was never turned over. We need a national debate over the deaths of Singh and other American victims, not over amnesty for these very violent young males coming from Central America.

Concurrently, Trump should threaten Democrats that he will build up the military on our border, something he should do anyway, which would then enable him to open up a number of defense accounts to build the wall. The threat of getting what he wants without a bill will bring Democrats to the table.

You know what else will bring Democrats to the table? If Trump finally does the right thing with DACA and announces that he can no longer defy the statute because of an illegal universal injunction by a lower court. With Chief Justice Roberts and possibly other justices playing politics at the Supreme Court and allowing what is perhaps the most dangerous and illegal decision ever made by a lower court stand, Trump needs to follow the law and terminate Obama’s amnesty. That will force the Supreme Court to take up the case and ruin Democrat leverage on the issue.

Unless Republicans finally go on offense and try to score points, this saga will just end in an interception with permanent amnesty. In that case, it’s better just to pass a budget bill and call it quits. (For more from the author of “Conservatives Are Facing Failure in the Senate Unless Trump Changes Strategy” please click HERE)

Democratic Congressman Who Called Trump a ‘Grand Wizard’ Says He...