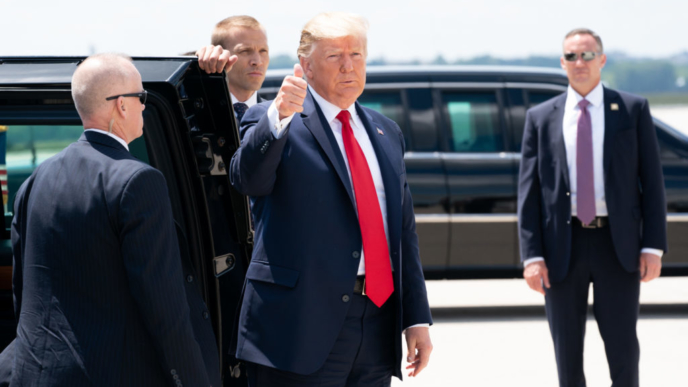 Oz, who hosted The Dr. Oz Show on several stations beginning in 2009, announced his candidacy to replace retiring Republican Sen. Pat Toomey in November. His show ended in January following his declaration. He is polling behind former Bridgewater Associates CEO David McCormick, although recent surveys have shown a tightening race.

“This is all about winning elections in order to stop the Radical Left maniacs from destroying our Country. The Great Commonwealth of Pennsylvania has a tremendous opportunity to Save America by electing the brilliant and well-known Dr. Mehmet Oz for the United States Senate,” Trump said in a statement.

“Perhaps most importantly, I believe that Mehmet Oz will be the one most able to win the General Election against a Radical Left Democrat looking to do unthinkable harm to our Country,” Trump added. “He will do very well in Philadelphia and Pittsburgh, where other candidates will just not be accepted.”

45: @DrOz is smart, tough, and will never let you down, therefore, he has my Complete and Total Endorsement. Good luck, Dr. Oz. our Country needs you! pic.twitter.com/kWJl7ll2vb

Well before gaining Trump’s endorsement, Oz maintained close ties with the former president since Trump appeared on his show to discuss his health while running for the presidency in 2016. Trump shared what he said were his medical records with the TV doctor, who deemed them “comprehensive.” Oz was later appointed to the Trump administration’s health council. . .

Here’s how some Trumpworld figures imploded upon finding out about Trump’s new endorsement:

I have enormous respect for President Trump. I was honored to have his endorsement in PA.
Twice
But I’m disappointed by this. Oz is the antithesis of everything that made Trump the best president of my lifetime—he’s the farthest thing from America First & he’d be very bad for PA https://t.co/kuTo4pp53U

Trump endorsing Dr. Oz confirms what Trump supporters fear for 2024. Trump was a good POTUS (minus covid response). His worst thing was surrounding himself with idiots, suck ups & deep state. We worry, has he learned his lesson or will 2024 be a repeat? Endorsing Oz? The same.😬

Do NOT trust this guy.

Oz will be another Mitt Romney in the Senate.

It’s like Donald Trump’s staff is sabotaging Trump by convincing him to make the worst possible endorsements.

This endorsement could divide MAGA in the only way that matters: he could lose America First conservatives over it https://t.co/UC22IlLdFy

White House Tries to Pass the Buck to Putin as It Warns Inflation Is Getting...
Scroll to top