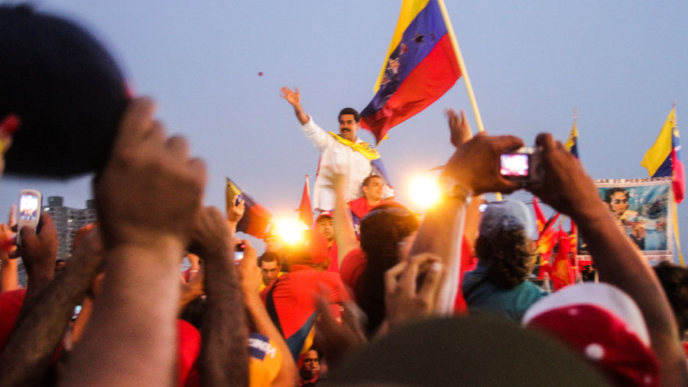 On Wednesday, taking a typically unequivocal stance, President Trump recognized Juan Guaido, 35, the president of the Venezuela National Assembly who is in opposition to socialist President Nicholas Maduro, as the interim president of Venezuela just minutes after Guaido announced himself as the head of state.

As Bloomberg reports, at a protest in Caracas before hundreds of thousands of people, Guaido stated he would assume the powers of the Venezuela presidency, citing a constitutional amendment that permits the head of the legislature to do so. He said, “I swear to formally assume the powers of the national executive as interim president of Venezuela to achieve the end of the usurpation.” NBC News noted, “The protests were called to coincide with the anniversary of the 1958 coup that overthrew military dictator Marcos Pérez Jiménez – a historic date for Venezuelans.”

Guaido became the president of the Venezuela National Assembly on January 5. Roughly two weeks ago, Maduro was inaugurated for a second, six-year term, but many countries, including the United States, have called his election illegitimate.

In its role as the only legitimate branch of government duly elected by the Venezuelan people, the National Assembly invoked the country’s constitution to declare Nicolas Maduro illegitimate, and the office of the presidency therefore vacant. The people of Venezuela have courageously spoken out against Maduro and his regime and demanded freedom and the rule of law … We encourage other Western Hemisphere governments to recognize National Assembly President Guaido as the interim president of Venezuela, and we will work constructively with them in support of his efforts to restore constitutional legitimacy. We continue to hold the illegitimate Maduro regime directly responsible for any threats it may pose to the safety of the Venezuelan people.

40,000 Iranian agents on American's Doorstep, Awaiting Orders from Tehran
Romney slams Obama's pandering statement to Spanish TV that Chavez is no threat to US interests
Venezuela's Chavez weighs in on US Presidential Race - in favor of Obama
More Pentagon incompetency: Hugo Chavez "does not represent a threat to US security"
Iran Cementing Relations With Venezuela & Bolivia While Obama Looks On
Venezuela's Chavez May Lose Election Next Week

Trump to Pelosi: ‘I Will Be Honoring Your Invitation’ for the State...

Democratic Congressman Who Called Trump a ‘Grand Wizard’ Says He...
Scroll to top