China now has more cases of Wuhan coronavirus than it did of the SARS virus during the 2002-03 outbreak, according to the country’s own numbers, but a vaccine could be on the way soon.

According to the New York Post, China has reported 5,974 cases of the fast-spreading illness, which surpasses the 5,327 cases of SARS the country experienced over a decade ago. The Associated Press, however, notes that Wednesday’s death toll of 132 is well below the SARS outbreak’s Chinese death toll of 348.

But while it appears to be less deadly, CNN notes, the Wuhan virus is spreading much faster than SARS, taking less than two months to hit around 75 percent of the total number of worldwide infections of the 2002-03 outbreak, which took place over a period of nine months.

The news comes on the same day as a World Health Organization official described the rapid spread of the virus as a matter of “grave concern” at a news conference at the organization’s headquarters in Geneva.

“These developments in terms of the evolution of the outbreak and further development of transmission, these are of grave concern and has spurred countries into action,” said Dr. Mike Ryan, executive director of the WHO’s health emergencies program. “What we know at this stage, this is still obviously a very active outbreak and information is being updated and changing by the hour.”

Most of the 6000+ new #coronavirus cases are in #China – just 1%, or 68 cases, have been recorded to date in 15 other countries. But some person-to-person transmission in 3 countries outside of 🇨🇳 has been recorded. This potential for further global spread is why I called the EC

(Read more from “Could a Vaccine Be on the Horizon to Combat Coronavirus?” HERE) 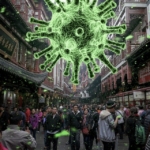 Thanks to Lisa Murkowski, McConnell Doesn’t Have Enough Votes to Prevent...

State Determines Convicted Child Molester No Longer a Threat Due to Sex Cha...
Scroll to top