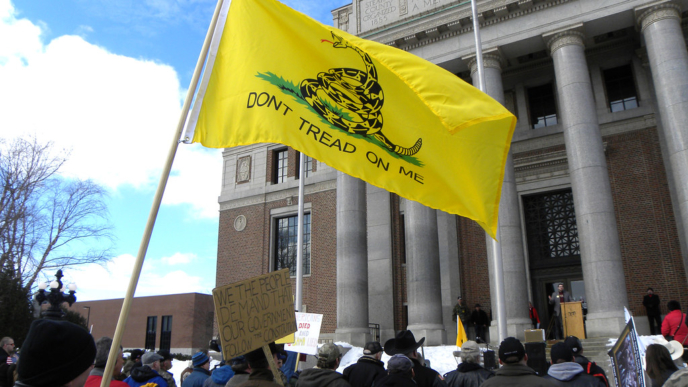 By Daily Caller. The story of last week’s gun rights rally in Virginia was one of narrowly-avoided disaster, according to several mainstream outlets, with law enforcement stepping in just in the nick of time to prevent a mass shooting.

The FBI’s own court filings tell an entirely different story though, one in which white extremists stumbled from one surveillance trap to another without much situational awareness.

The New York Times, the Associated Press, and BuzzFeed narrative centered around the arrest of three men: William Bilbrough, Brian Lemley, and Canadian national Patrik Mathews–all members of the The Base, a white supremacist organization that interacts mostly online and aims to create a white ethno-state. The media implied the group was arrested while planning an attack at the Virginia rally, but that is not what law enforcement documents show.

This is the plan The Base's cell actually came up with for Richmond.

They decided not to go to the rally, but camp out, & wait for the expected civil war to start.

They weren't busted on their way to a terrorist attack.

They were busted on their way to a camping trip. pic.twitter.com/uuyuhu32rO

Firstly, the group decided not to actually go to a rally. They also decided not to start any violence. They planned to wait for a race war to start, as voice recordings show, and then join in.

Records show that police were long in position to prevent these men from successfully attacking anyone. The FBI had been tracking their movements since September 2019 and installed video and audio recording devices inside their Delaware residence in December 2019, according to the FBI’s motion to detain the three men. (Read more from “Were White Nationalists Really Planning to Attack the Virginia Gun Rights Rally?” HERE)

By Check Your Fact. HuffPost published an article with a headline claiming “thousands” of “far-right extremists” attended a Jan. 20 gun-rights rally in Richmond, Virginia. . .

While some nationalist groups did attend the Richmond gun-rights rally, there’s no evidence “thousands” of “far-right extremists” were there. Experts and journalists gave the Daily Caller News Foundation lower estimates.

The Virginia Division of Capitol Police estimated 22,000 people attended the Jan. 20 gun-rights rally in Richmond to protest various recent gun control proposals. Some officials feared violence might occur at the rally, particularly after the FBI announced days before that it had arrested three alleged members of white supremacist group The Base. But, despite these concerns, the rally remained peaceful, with only one reported arrest, according to The Washington Post.

Labor Battle at Center of Virginia Senate Race
Video: Obama is going to impose gun control by treaty . . . on July 27?
Video: Larry Pratt hammers Obama for trying to violate Constitution with UN Gun Control Treaty
Video: NYC Mayor encourages police to not protect public until gun control is enacted
Effort to register your pet to vote for Obama moves to Virginia; Romney complains
Must watch video: What happens when a nation bans guns

The U.S. Government Is Letting Marine Veteran Austin Tice Languish in a Syrian...