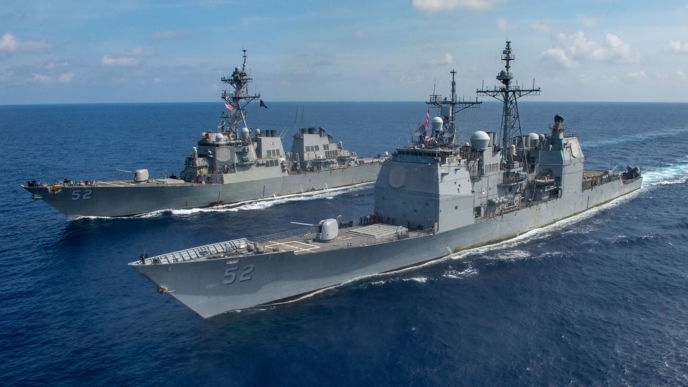 By Asia Time. . .The USS America, a new amphibious assault ship, is now patrolling in the South China Sea with another US cruiser, a US destroyer and an Australian destroyer.

They are operating near where a Chinese research vessel backed by Chinese Coast Guard ships is in a standoff with Malaysian ships. The Malaysians object to the Chinese being inside their Exclusive Economic Zone, which China claims as its own, along with most of the South China Sea.

Rear Admiral Fred Kacher, commander of the America Expeditionary Strike Group, stated: “To bring this much combat capability together here in the South China Sea truly signals to our allies and partners in the region that we are deeply committed to a free and open Indo-Pacific.”

One wonders how much backup they have? Perhaps a submarine or two nearby. But air support? The USS America has some F35s and helicopters, but it is no aircraft carrier. . .

The People’s Liberation Army Navy (PLAN) simply has far more ships in the South China Sea and close by. Estimates for the region range from five to ten Chinese warships for each US Navy ship. And the oft-presumed superior American capability does not even things up. (Read more from “China Could Soon Sink U.S. in South China Sea” HERE)

By New York Post. A months-long standoff between Chinese and Malaysian vessels in disputed waters in the South China Sea over oil exploration has drawn US, Chinese and Australian warships, according to reports.

The high-stakes drama began in December when Malaysia’s state oil company Petronas contracted a ship to explore waters in the country’s extended continental shelf that are also claimed by China and Vietnam, according to Bloomberg News.

Those two countries dispatched ships to shadow the Malaysian vessel.

On April 16, the Chinese surveyor Haiyang Dizhi 8 entered the fray while accompanied by a coast guard ship sent by Beijing, prompting the US and Australia to deploy warships to the area, Reuters reported. (Read more from “U.S., Chinese warships enter South China Sea as tensions rise over oil dispute” HERE)