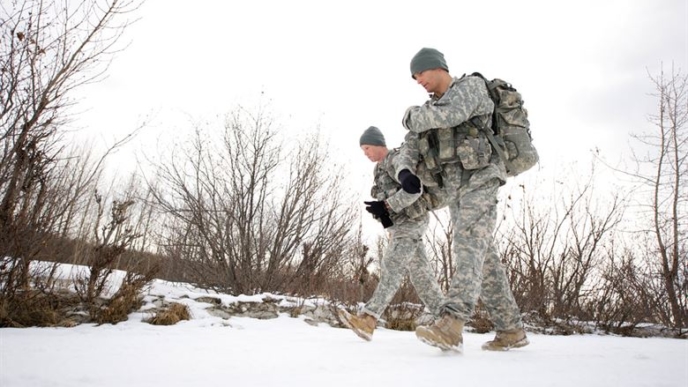 The Army upgraded the design of its Arctic Tab and issued new guidance for wearing the accoutrement as the Defense Department increasingly looks to bolster its cold-weather warfare capabilities.

While the move may seem small, it comes during a time of increased competition for resources in the Arctic region with Russian, and even China. As sea ice increasingly recedes, new economic opportunities emerge, but so does competition.

The Arctic Tab was originally worn below a soldier’s unit patch and could only be worn while assigned to Army Alaska, a subordinate command to Army Pacific and the ground force defending much of the U.S. territorial claims near the Arctic region.

Now, the redesigned tab is worn above the unit patch like the Ranger and Sapper tabs. It can also be worn by those serving at all Army Pacific installations throughout that command’s area of operations.

“I think what makes U.S. Army Alaska and our units unique is that we are the Army’s proponent for cold weather training,” said the Alaska-based commander, Maj. Gen. Peter B. Andrysiak Jr., in a press release this week. “We not only live here; we thrive here, and I want to make sure the tab properly recognizes our unique expertise.” (Read more from “New Arctic Tab Comes With a Ranger Tab Spin to Show Importance of Cold-Weather Fighting” HERE)

US Army Gets Caught Allegedly Pirating $180 Million In Software