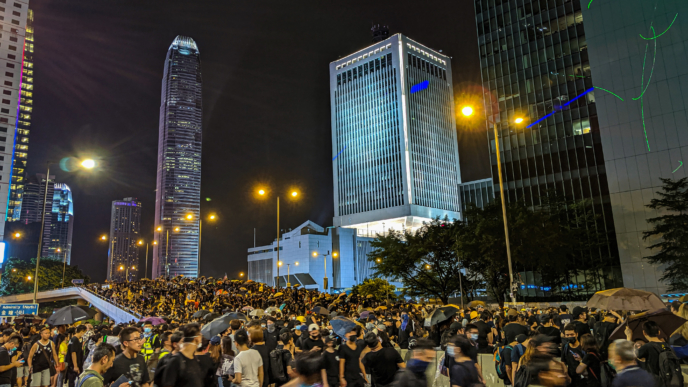 Hong Kong riot police on Tuesday evening dispersed a protest marking the first anniversary of the Yuen Long railway station attack, a major event in the 2019 protests locally known as the “721 Incident.”

Police searched out and fined both demonstrators and journalists covering the event, along with two politicians, Kwai Tsing district councilor Rayman Chow and Democratic Party lawmaker Ted Hui. The police denied claims they used excessive force, including pepper balls. The demonstrators reportedly favored black clothing, an inversion of the white shirts worn by the swarm of club-wielding men who attacked pro-democracy protesters, journalists, and innocent bystanders at the Yuen Long station on July 21, 2019.

Critics of the Hong Kong government say Beijing may have ordered the assault, using hired gangsters as muscle and apparently indulged by the Hong Kong police, who responded very slowly to the bloody rampage at Yuen Long and have not vigorously investigated the organizers of the attack.

A few provocative local media reports fueled public anger with the police as the Yuen Long anniversary approached. A documentary prompted the authorities to grudgingly admit they were aware of the white-shirted, club-wielding thugs assembling before they swarmed into the station and started beating people. Further, a separate piece in the pro-democracy newspaper Apple Daily claimed internal documents show the police were ordered not to respond to calls for help from Yuen Long on the day of the attack.

To date, police have charged only seven people with “rioting” and “conspiracy to injure others” for the 721 Incident, even though over a hundred white-shirted men participated in the beatings. A number of attackers caught on video or photographed by onlookers conspicuously remain unarrested, including one filmed beating up a reporter. (Read more from “Hong Kong Police Detain Protesters, Journalists, and Politicians, Deny Claims of Excessive Force” HERE)

EXPOSED: BLM Unites With Islamists and Communists to Dismantle the West (VI...
Scroll to top