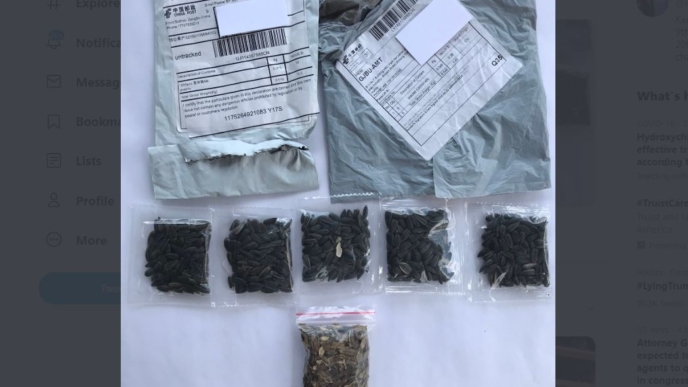 By Emily Czachork. Kentucky is one of eight U.S. states where residents have reportedly received parcels containing unlabeled seeds, seemingly sent from China by mail.

Ryan Quarles, commissioner of the Kentucky Department of Agriculture, issued an alert [Sunday:] “Multiple states have opened investigations,” he wrote on Twitter, before providing residents with instructions should they receive one of the unsolicited parcels.

A photo attached to Quarles’ tweet showed six small seed bags wrapped in clear packaging. One seemed to contain a different variety of seed from the rest. Chinese characters appeared on two mailing labels pictured, as did a description listing the parcels’ contents as “jewelry” in English.

Kentucky is now the 4th known state to report suspicious packages appearing to originate from China containing seeds. Multiple states have opened investigations. If you receive a suspicious package of seeds that you did not order: pic.twitter.com/kHBwKIT7W5

Agricultural departments in Virginia, Washington, Louisiana and Kansas shared nearly identical reports late last week. Each warned of potentially invasive species in its alert notice and encouraged residents to report any related information to the state. Residents in Utah, Arizona and Ohio have reportedly received unlabeled packages with seeds as well. (Read more about the unidentified seeds HERE)

By Thomson/Reuters. The U.S. Department of Agriculture on Monday warned residents against planting unsolicited packages of seeds arriving from China because they could harm the environment.

At least eight states, from Washington to Ohio, have also told residents in recent days not to put the seeds in the ground, after they arrived apparently from China in the mailboxes of people who did not order them. Officials said the seeds could be invasive species that could threaten crops or livestock.

“At this point in time we don’t have enough information to know if this is a hoax, a prank, an internet scam or an act of agricultural bioterrorism,” Ryan Quarles, Kentucky’s agriculture commissioner, said in a video posted on the department’s website. . .

The Chinese Embassy in Washington, DC, did not immediately respond to a request for comment. (Read more about the unidentified seeds HERE)

The Real Danger With Mail-In Voting Is Presenting Itself Clearly; Soros, Wealthy...