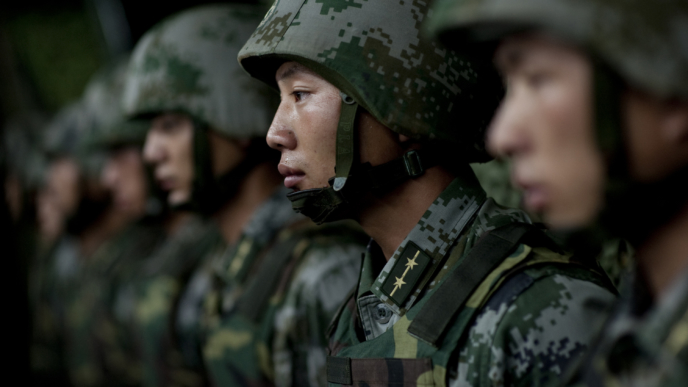 By Bill Gertz. What intelligence agencies call “indications and warnings” — signs of potential hostile military or other actions against the United States — are being detected from inside China. Analysts suggest these movements reveal Beijing may be preparing for some type of military or covert action. . .

The account @TruthAbtChina on July 25 tweeted video from Beijing and Shanghai showing posters instructing people how to go to underground bunkers if an alarm signals a military attack . . .

CONFIRMED: The CCP put up posters in Beijing instructing people to go to underground bunkers if the alarm goes off signaling they are at war.

The poster reads: "How to quickly enter the wartime civil air defense facility after you hear the alarm"

Another source in Asia reported that Taiwanese ham radio operators were picking up indicators that China may be preparing to take some type of action against Taiwan’s outer islands, which are closer to the mainland than the main Taiwan island, which sits around 100 miles off the southern coast.

A third indicator comes from a businessman with contacts inside China who says locals there are reporting unusual movements of equipment and shifts in production at some factories away from producing civilian products.

By Alice Su and Tracy Wilkinson. Fears are rising on both sides of the Pacific that the U.S. and China could be headed for a total breakdown of relations and even outright conflict within the next few months.

As the two powers ordered the closure of each other’s consulates in Houston and Chengdu last week amid allegations of espionage, Secretary of State Michael R. Pompeo called for the end of “engagement,” a policy that has defined U.S.-China relations for nearly five decades and is considered one of the Republican establishment’s most important foreign policy achievements in recent history. . .

In addition to the consulate shutdowns, the U.S. last week charged two Chinese nationals with hacking for Chinese intelligence agencies and arrested a Chinese researcher who had been hiding in the San Francisco consulate. She was part of a long-standing network of Chinese industrial spies spanning 25 cities, the U.S. Justice Department claimed.

“I am extremely worried about the arrogant inflexibility of China in the South China Sea,” [said Orville Schell, director of the Asia Society’s Center on U.S.-China Relations], pointing also to Xi’s stances on Tibet, Xinjiang, Taiwan and Hong Kong so far. To Xi, those are “core interests,” Schell said: “End of story. Shut up. No negotiation.” (Read more about China preparing for conflict with the U.S. HERE)

It Is Resistance, Not Trump, That Needs to Learn to Accept Election Results;...