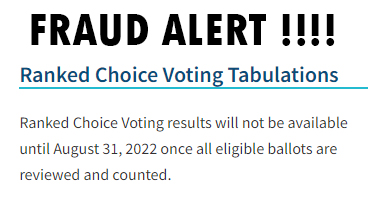 Here are the unofficial U.S. Senate results from Alaska’s Establishment-controlled Division of Elections for the “ranked voting” primary (the top four advance to the general): 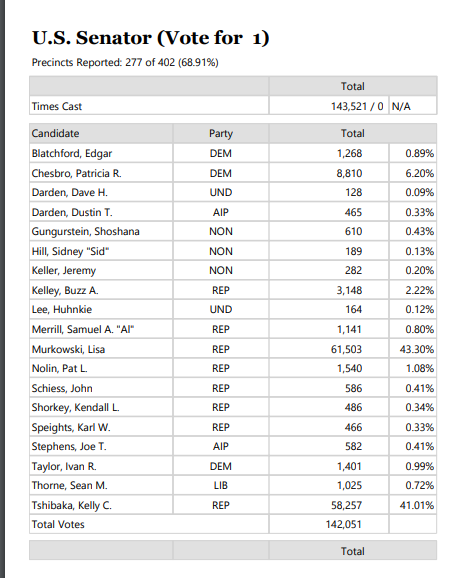 Note, Lisa Murkowski, who committed extraordinary fraud in the 2010 U.S. Senate Race, and likely in 2016 as well, is leading her GOP opponent by several thousand votes. Many pundits assert that Murkowski has an even stronger advantage in the general election where she will pick up the second-position votes from the Democratic contender and left-leaning Republican in the top four.

Here are the unofficial U.S. House results from Alaska’s corrupt Division of Elections for the “ranked voting” primary (the top four advance to the general): 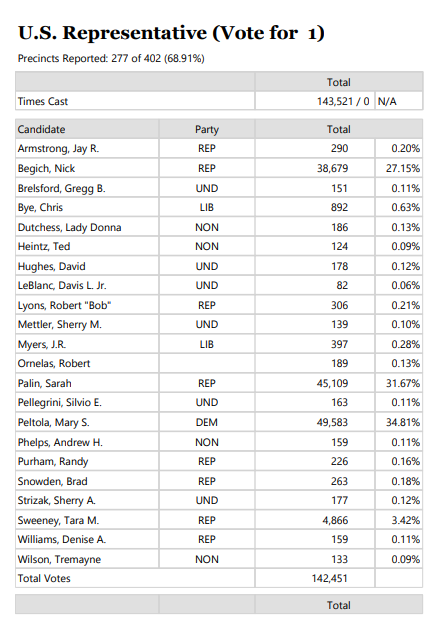 Note, Sarah Palin is in second place, assuring her that she will advance in the top four to the general. However, there is concern that many of the other candidates’ supporters will not rank her as a second-choice pick putting her candidacy at risk. Restoring Liberty believes she will pick up enough of Nick Begich’s second choice votes that she stands a good chance of winning the general election. 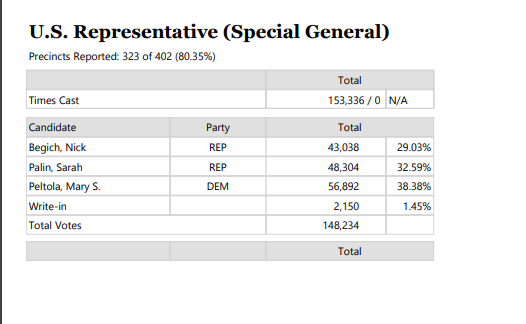 This election is decided by ranked voting. Note, the Democrat is beating Sarah Palin in first place votes, but the loser’s (Nick Begich’s) second place votes are then awarded to the top two vote-getters. So Palin has a solid chance of pulling this off.

HOWEVER, the winner of this election will not be declared for WEEKS! Our fraud-laced Division of Elections has posted the following:

If machine voting is so darn accurate, why not immediate results? The obvious answer: more time to manipulate the votes.

Murkowski’s Fate in the Balance

By Breitbart. . .Also on Tuesday in Alaska voters will decide which candidates will advance to the general election in November in two important races, the U.S. Senate race for the seat currently occupied by Sen. Lisa Murkowski (R-AK) and for the open congressional seat vacated by the passing of the late Rep. Don Young (R-AK). What’s more, a special election for the remainder of Young’s term will take place as well. The state’s former Gov. Sarah Palin is running in both races–the special election and the 2022 election–and she has the endorsement of Trump. Trump has backed Kelly Tshibaka in the race against Murkowski, where the top-four vote-getters, Murkowski and Tshibaka, are expected to be among them, as well as a Democrat and another candidate, likely a libertarian, will advance to the general election for a ranked-choice vote in November.

Polls close in Wyoming at 9:00 p.m. ET, and in most of Alaska at midnight ET. Results are expected in Wyoming tonight, and in Alaska not until at least later this week and they might even take longer, given the complexities of the new ranked-choice voting system. Follow along here for live updates as the results pour in. . .

Per Trump’s team, these are the endorsements he has on the line … :

By Daily Mail. Polls closed early Wednesday morning in Alaska, as voters decided on whether to give former Republican vice presidential nominee Sarah Palin another shot at elected office.

Palin has two chances – as she’s running in both the special election to fill the remainder of late Alaska Rep. Don Young’s seat – and in the primary to take the reins come January.

Both Murkowski and Tshibaka are expected to move on to the November general election, thanks to the state’s new ranked-choice voting system.

See It: Mike Tyson in Wheelchair Weeks After Claiming His Death Is ‘Coming...
Scroll to top