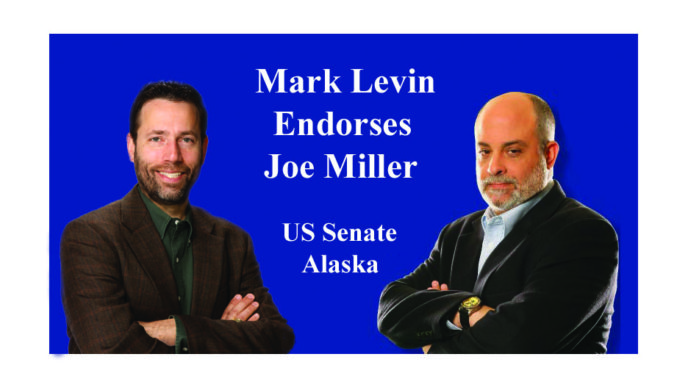 Levin described himself as a “big fan” of Miller, while observing, “Murkowski is a leftist” and the “right-hand person” of Senate Majority Leader Mitch McConnell.

The talk show host also pointed out that Murkowski earned an “F” on the Conservative Review scorecard, based on her voting record.

Despite being from the Last Frontier, “Murkowski acts like a Republican from New Jersey,” said Levin.

Miller agreed, noting that her votes are “Not at all representative of Alaska values.” He highlighted that the senator voted with President Obama 72 percent of the time during the last Congress, and his other rivals for the seat are left of center, as well.

“So we have a clear path to victory, and the grassroots are excited as can be that I’m in,” said Miller.

Levin wondered if Miller’s entry created the possibility for a Democrat to take the seat.

“No risk at all,” the candidate replied. “We have a Democrat who will probably get less votes than the Democrat-leaning Independent who has raised over a half a million dollars and has the Democratic Party’s support.”

Though no public polling exists following Miller’s entry, the Murkowski campaign released a poll in early September, which showed the Democrat and independent candidates taking a combined 17 percent. Therefore, it seems very likely Murkowski and Miller will be vying for the top spot in the race, once again.

“This is a beautiful race where a true conservative has the opportunity to win, as long as everybody activates,” said Miller.

Despite entering the race in mid-September, Miller has already garnered the endorsements of Gun Owners of America, Alaska Right to Life, and the support of the Alaska Republican Assembly. Additionally, five members of the Alaska GOP’s Central Committee stepped down to back Miller and one was voted out for doing so.

Miller also has the support of the co-chair of Donald Trump’s campaign in Alaska and the former co-chair of Sen. Ted Cruz’s campaign. Cruz won the state’s presidential primary with 36 percent of the vote to Trump’s 33.5. In total, non-establishment candidates took over 80 percent of that vote.

Joe Miller is a limited government Constitutionalist who believes government exists to protect our liberties, not to take them away. He supports free people, free markets, federalism, the Constitutional right to life, the Second Amendment, religious liberty, American sovereignty, and a strong national defense.

Trump-Clinton I: What to Expect From the First Presidential Debate Showdown