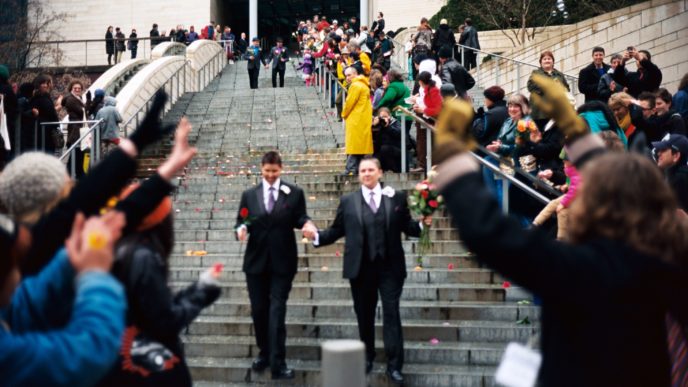 A farmers market and Facebook posts have opened a new front in courtroom battles over religious freedom.

It started when Steve Tennes, who owns a 120-acre farm in Charlotte, Michigan, expressed his traditional view about marriage on the farm’s Facebook page.

This drew a warning from an official more than 20 miles away in East Lansing, Michigan, that if Tennes tried to sell his fruit at the city’s farmers market, it could incite protests.

No one showed up to protest that August day last summer, though, and Tennes continued selling organic apples, peaches, cherries, and pumpkins at the seasonal market until October, as he had done the six previous years.

Nevertheless, East Lansing moved earlier this year to ban Tennes’ farm, the Country Mill, from participating in the farmers market when it resumes June 4. The city cited its human relations ordinance, an anti-discrimination law that includes sexual orientation.

So Tennes and his wife sued the city for religious discrimination.

As a Marine veteran who is married to an Army veteran, Tennes told The Daily Signal, this was consistent with his philosophy of defending freedom:

My wife Bridget and I volunteered to serve our country in the military to protect freedom, and that is why we feel we have to fight for freedom now, whether it’s Muslims’, Jews’, or Christians’ right to believe and live out those beliefs.

The government shouldn’t be treating some people worse than others because they have different thoughts and ideas.

Neither East Lansing’s public information office nor the city manager’s office responded Wednesday to phone calls about the case from The Daily Signal.

East Lansing Mayor Mark Meadows told the Lansing State Journal that the city’s decision to exclude Country Mill—also known as Country Mill Orchard—from the farmers market had nothing to do with religious beliefs, but with the farm’s “business decision” not to host same-sex weddings.

“This is about them operating a business that discriminates against LGBT individuals, and that’s a whole different issue,” Meadows said.

The lawsuit, filed Wednesday with the U.S. District Court for the Western District of Michigan, says of Steve and Bridget Tennes’ perspective, in part:

Plaintiffs support the rights of citizens and other businesses to express their views about marriage. Plaintiffs simply seek to enjoy the same freedom.

Yet, East Lansing’s policy strips plaintiffs of their constitutional freedoms, including free speech and the free exercise of religion, by punishing plaintiffs’ viewpoint on marriage, going so far as to prohibit Country Mill from continuing its long history of participating in the farmers market because plaintiffs publicly stated their sincerely held religious view that marriage is a union between one man and one woman.

The suit also says the farm “has employed people from a wide variety of racial, cultural, and religious backgrounds, including members of the LGBT community.

In 2014, two lesbians sought to be married in a wedding ceremony at Country Mill, but Tennes turned them down.

This occurred before the 2015 Supreme Court ruling in Obergefell v. Hodges, which legalized same-sex marriage across the country.

According to his legal complaint, Tennes had a “civil” discussion with the women, and said his venue didn’t host same-sex weddings because of his religious beliefs. But he referred the women to an orchard that held same-sex weddings.

In 2015, the two women were married at another orchard. On Aug. 22, 2016, one of them wrote a Facebook post discouraging consumers from doing business with Country Mill.

In response, Tennes initially said the farm would cease holding any weddings, writing on Facebook:

After this post, the East Lansing official asked Tennes not to sell produce at the market, saying he feared protests.

Tennes did anyway, and no protest occurred, according to the lawsuit.

In December, Tennes announced on Facebook that Country Mill would resume holding weddings:

This past fall our family farm stopped booking future wedding ceremonies at our orchard until we could devote the appropriate time to review our policies and how we respectfully communicate and express our beliefs. The Country Mill engages in expressing its purpose and beliefs through the operation of its business and it intentionally communicates messages that promote its owners’ beliefs and declines to communicate messages that violate those beliefs.

The Country Mill family and its staff have and will continue to participate in hosting the ceremonies held at our orchard. It remains our deeply held religious belief that marriage is the union of one man and one woman and Country Mill has the First Amendment right to express and act upon its beliefs. For this reason, Country Mill reserves the right to deny a request for services that would require it to communicate, engage in, or host expression that violates the owners’ sincerely held religious beliefs and conscience.

Furthermore, it remains our religious belief that all people should be treated with respect and dignity regardless of their beliefs or background. We appreciate the tolerance offered to us specifically regarding our participation in hosting wedding ceremonies at our family farm.

East Lansing city officials determined that these public statements violated the city’s 1972 human relations ordinance prohibiting discrimination. That law was the first in the state to recognize sexual orientation as a protected class from discrimination.

But this brought up a jurisdictional issue on top of First Amendment concerns, the farmer’s lawsuit says.

East Lansing, the complaint says, “has no authority to enforce its ordinance based on Tennes’ religious beliefs and their impact on how he operates Country Mill.” The farm, it says, is 22 miles outside the city.

The lawsuit also notes that the city has not taken action against a vendor that promoted same-sex marriage.

In March, East Lansing sent Tennes a letter denying Country Mill’s application to be a vendor at the 2017 farmers market:

It was brought to our attention that the Country Mill’s general business practices do not comply with East Lansing’s civil rights ordinances and public policy against discrimination as set forth in Chapter 22 of the City Code and outlined in the 2017 market vendor guidelines.

“As such,” the letter reads, “Country Mill’s presence as a vendor is prohibited.” (For more from the author of “This Farmer Won’t Host Same-Sex Weddings at His Orchard. Now a City Has Banned Him From Its Farmers Market.” please click HERE)