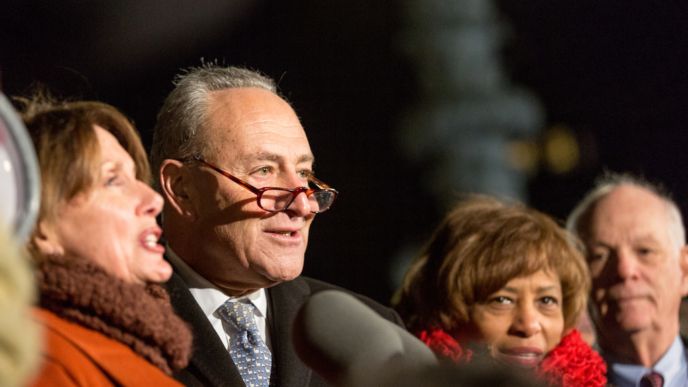 Eight Republican senators just signed onto Sen. Chuck Schumer’s, D-N.Y., newly introduced amendment to grant de facto amnesty to every single illegal alien of any age present in this country who has not been convicted of a serious crime. Additionally, it invites people to sneak over the border for the next four months to enjoy amnesty as well. The American people need to know who these people are. Call them the new Gang of Eight: 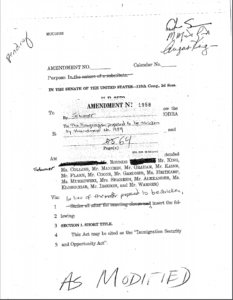 It is quite evident by the pencil marks on the bill that Schumer wrote the bill but then filed it in the names of Mike Rounds and Angus King, I-Maine. I doubt Rounds even understands the consequences of this bill. Yet, this man who never ran on amnesty is now granting amnesty forever and shutting down all deportations.

Take a look at the final page of the amendment: 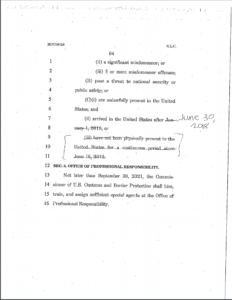 Penciled in at the end is the crossing out of 2012 as the cut-off date for amnesty and dictating that anyone who comes to the United States after June 30, 2018 – 4 months from now – will get de facto amnesty. This is extremely dangerous and unconscionable that eight Republicans would sign onto such a proposal. While the cut-off for affirmative amnesty with positive legal status is still 2012, this bill dictates that DHS shall “prioritize available immigration resources” only for criminal aliens (and not all criminals) or those brought after four months from now.

This essentially shuts down the deportation of almost every illegal alien currently in the country while simultaneously inviting in new illegals to flood our borders for four months under the promise of no deportation.

Think about it: even under current law when statute unambiguously dictates that all illegals must be deported, fake judges are granted judicial amnesty and saying you are not allowed to deport those who aren’t dangerous criminals. Once it is written clearly in statute that DHS SHALL prioritize only those who come later, the courts will invalidate every single deportation of anyone who came before that point.

This also means that all of the MS-13 gang members who came in from Central America in 2014 (and are still coming) as a result of DACA amnesty will now be free from deportation.

So much for the general sentiments of “dreamers” and “of no fault of their own.” We always knew this was a down payment to abolish deportations and national sovereignty.

And even the affirmative amnesty provisions apply to anyone under the age of 43. It is not just those who received DACA, but at least 3 million illegals and it provides a clear pathway for millions of their parents.

Now consider this: Senator Cory Gardner, R, Colo., is the man in charge of recruiting other candidates to run as…Republicans. The chairman of the Republican Senatorial Committee now wants to grant amnesty to every illegal here and essentially shut down all deportations in the courts in perpetuity.

It’s time for President Trump to walk away. And it’s time for GOP voters to pledge to never vote for any of these Republicans in a primary or general election ever again.

Game. Set. Match. We have no country left. (For more from the author of “Meet the New Gang of 8: GOP Senators Push Amnesty for FUTURE Illegal Aliens” please click HERE)