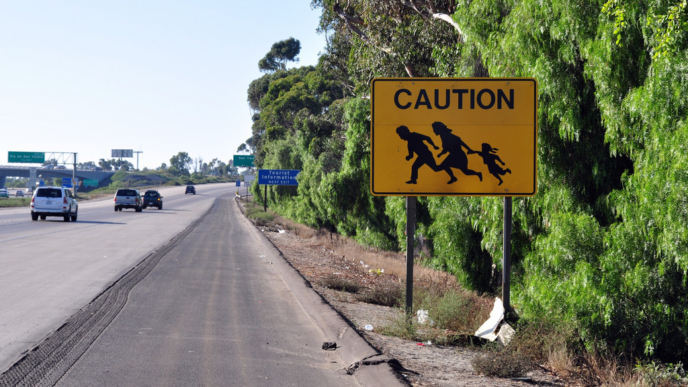 A growing number of illegal immigrants are abducting children in order to falsely claim them as family members in an effort to improve their chances of gaining entry into the United States, according to a report Tuesday by The Washington Times.

According to statistics provided by the Department of Homeland Security, there have been 191 cases of children having to be separated because of fraudulent family claims during the first five months of fiscal year 2018. That far exceeds the 46 cases reported for all of 2017.

That puts the U.S. on pace for more than 400 such attempts this year, which equates to a 900-percent increase over last fiscal year.

“The eye-popping increase in fraud and abuse shows that these smugglers know it’s easier to get released into America if they are part of a family and if they bring unaccompanied alien children,” Katie Waldman, a Homeland Security spokeswoman, told the newspaper.

“These loopholes make a mockery of our nation’s laws, and Congress must act to close these legal loopholes and secure our borders.”

As the number of families seeking to enter the country increases, the number of cases where illegal immigrants who aren’t even related to the children are showing up and fraudulently claiming to be families is on the rise.

The Times says its research found Honduran men on multiple occasions have attempted to cross into Texas with unrelated children in tow and bogus birth certificates claiming to show parentage.

The paper says not all of these cases involve abductions. Some involve children whose parents knowingly lend them to friends looking to pose as a family.

He said the parents know that if they came as a couple along with their children, one parent might be separated, leaving just the other parent with the children. But if they cross individually, each with a child, agents won’t separate the child from someone who appears to be a single parent.

The Times report says authorities attribute the surge to an overall increase in attempts to jump the border and to a series of court rulings at the end of the Obama administration that created the family catch-and-release policy.

The Obama Justice Department actually argued that Gee’s 2016 ruling created an incentive for people to bring children on the dangerous journey — and in some cases to kidnap children to pose as families.

“When people now know that when I come as a family unit, I won’t be apprehended and detained — we now have people being abducted so that they can be deemed as family units, so that they can avoid detention,” Leon Fresco, deputy assistant attorney general for the Justice Department’s office of immigration litigation, told the 9th U.S. Circuit Court of Appeals at the time.

In a meeting last week with DHS Secretary Kirstjen Nielsen, President Donald Trump blamed Democrats for the laws being enforced at the border.

“It’s a horrible thing where you have to break up families,” Trump said. “The Democrats gave us that law and they don’t want to do anything about it. They’ll leave it like that ’cause they don’t want to make any changes. And now you’re breaking up families because of the Democrats. It’s terrible.” (For more from the author of “‘Eye-Popping’ Number of Children Abducted by Illegals, Used to Pose as Families” please click HERE)

Watch: You Need to Meet This Guy Who Fought a Crocodile to Impress a Girl

Doubling Down, Not Backing Down: Trump Calls MS-13 ‘Animals’ Again at Immigration...
Scroll to top