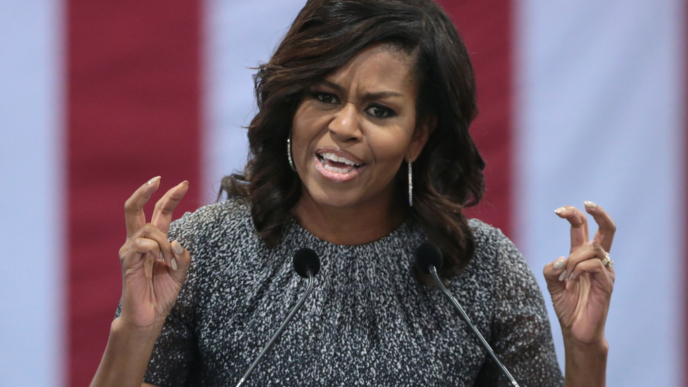 NBC News reports that Obama, clad in a shimmering green jumpsuit, was greeted by a “25-second standing ovation as she spoke about the importance of music” to her life.

“From the Motown records I wore out on the South Side to the ‘Who Run the World’ songs that fueled me through this last decade, music has always helped me tell my story, and I know that’s true for everybody here,” Obama told the audience. “Whether we like country or rap or rock, music helps us share ourselves, our dignity and sorrows, our hopes and joys. It allows us to hear one another, to invite each other in. Music shows us that all of it matters. Every story within every voice, every note within every song. Is that right, ladies?” . . .

Michelle Obama has been on something of a world publicity tour of late, after publishing her landmark book, “Becoming,” which quickly became an international bestseller. The former First Lady has also embarked on a multi-city arena book tour, sold out almost everywhere, dwarfing other authors on her imprint, and largely embarrassing her competitors — notably, Bill and Hillary Clinton who have all but canceled their joint book tour.

The PR full court press has left many wondering if Michelle Obama is being groomed for a future in national politics, particularly whether Michelle will run for president in either 2020 or 2024. (Read more from “Is This a Sign That Michelle Obama Will Run in 2020?” HERE)

University Actually Puts Student Protesters in Their Place After Demands to...