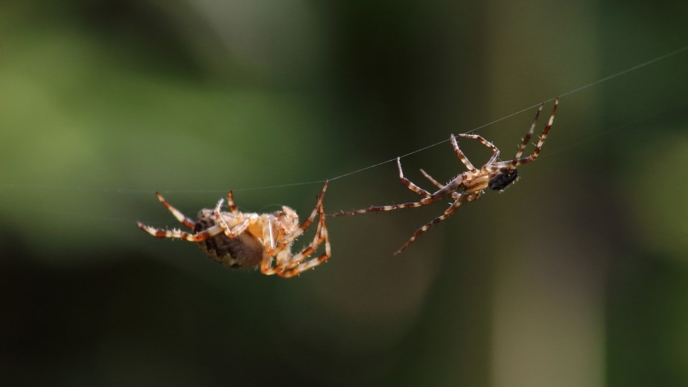 A collection of spider fossils was discovered in South Korea, including two with eyes that appeared to glow, according to a study. . .

Researchers say two of the fossils of the spider family Lagonomegopidae, believed to have lived 110 million to 113 million years ago, have reflective eyes that were helpful for hunting at night. . .

“Because these spiders were preserved in strange slivery flecks on dark rock, what was immediately obvious was their rather large eyes brightly marked with crescentic features,” Paul Selden, a professor of geology and director of the Paleontological Institute at the University of Kansas’ Biodiversity Institute and Natural History Museum, said in a statement.

The study was completed in collaboration with a researcher at the Korea Polar Research Institute and a high school teacher with the Daejeon Science High School for the Gifted in South Korea who discovered the fossils. . .

“It has to be a very special situation where they were washed into a body of water,” he said. “Normally, they’d float. But here, they sunk, and that kept them away from decaying bacteria – it may have been a low-oxygen condition.” (Read more from “Researchers Found Spider Fossils From ‘110 Million Years’ Ago. The Eyes Still Glowed” HERE)

Guns, Ammo, and Tactical Gear: Oh My! Here’s How Much Firepower Swamp...
Scroll to top