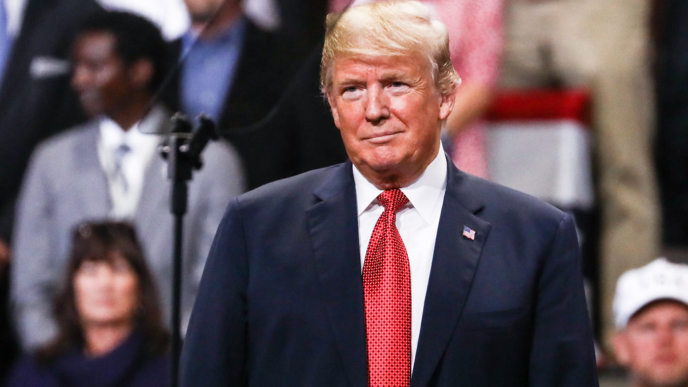 President Trump’s job approval rating has jumped to 47 percent in a new poll from the Washington Post and ABC News, his highest-ever mark in the series. He is only three points underwater (47/50) among registered voters, according to the numbers. As usual, there are red flags for Team Trump peppered throughout the data — but some of the top lines suggest that if the US economy remains in strong shape one year from now, the incumbent will be formidable, in spite of his perennially mediocre-to-poor public approval levels. In this snapshot, Trump’s standing is essentially the same as Barack Obama’s at this point in the 2012 election cycle:

President Trump’s approval rating has hit the highest point in his presidency, according to a new poll by the Washington Post and ABC News. The poll, which was released on Sunday, found that 47 percent of registered voters approve of Trump’s work inside the White House – a five point jump since April. Fifty percent of registered voters, however, still disapprove of Trump’s job in office. In comparison, Barack Obama’s approval rating during the same time in his first term was 46 percent…Despite [more than] six out of 10 Americans saying that Trump has acted in ways that are unpresidential, one-fifth of those voters still approve of the job the president is doing.

In addition to the survey showing Trump’s overall approval rating on the rise, a majority of registered voters also give a thumbs-up on his handling of the economy. On that crucial front (in case to you missed it during the long holiday weekend), job growth beat expectations in June, relieving concerns about May’s underwhelming unemployment report. And then there’s the historic milestone that passed largely unnoticed last week:

No sign of a slowdown // Trump economy continues to grow.

“Today’s jobs report shows the U.S. economy continues to create jobs at a strong pace even as we enter the longest period of economic expansion on record,” said Tony Bedikian, head of global markets at Citizens Bank. https://t.co/rKlchrrRir

Alexandria Ocasio-Cortez and Nancy Pelosi Throw down over Border Spending B...