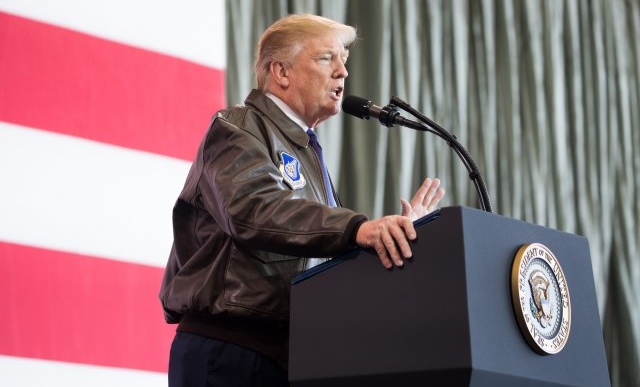 By Townhall. The Trump White House is throwing down the gauntlet. They’ve had it. After three years of being under siege by the Democrats and their allies in the media, the Trump administration is done playing nice. No one from the administration is going to cooperate. In the meantime, House Speaker Nancy Pelosi has declared the president will be held accountable. The White House flat-out told Democrats to go pound sound with their impeachment inquiry. . .

The letter is eight pages and outlines why this impeachment inquiry is a total circus. House Democrats executed this impeachment push based off of a July phone call Trump had with Ukrainian President Volodymyr Zelensky, where it was alleged in a whistleblower report that Trump had threatened to withhold military aid unless Zelensky opened a corruption probe into Hunter Biden. The transcript refuted all of that; there is no quid pro quo. The report is based on second-hand accounts. This person, who is reportedly a CIA agent and registered Democrat, never listened in on the call. They also worked with a 2020 candidate. Need I say more about the shoddiness of this attempt? It’s a witch hunt that is fueled by Trump Derangement Syndrome of the most extreme sort (via The White House):

For example, you have denied the President the right to cross-examine witnesses, to call witnesses, to receive transcripts of testimony, to have access to evidence, to have counsel present, and many other basic rights guaranteed to all Americans. You have conducted your proceedings in secret. You have violated civil liberties and the separation of powers by threatening Executive Branch officials, claiming that you will seek to punish those who exercise fundamental constitutional rights and prerogatives. All of this violates the Constitution, the rule of law, and eve1ypastprecedent. Never before in our history has the House of Representatives-under the control of either political party-taken the American people down the dangerous path you seem determined to pursue.

Put simply, you seek to overturn the results of the 2016 election and deprive the American people of the President they have freely chosen. Many Democrats now apparently view impeachment not only as a means to undo the democratic results of the last election, but as a strategy to influence the next election, which is barely more than a year away. As one member of Congress explained, he is “concerned that if we don’t impeach the President, he will get reelected.” 1 Your highly partisan and unconstitutional effort threatens grave and lasting damage to our democratic institutions, to our system of free elections, and to the American people.

For the foregoing reasons, the President cannot allow your constitutionally illegitimate proceedings to distract him and those in the Executive Branch from their work on behalf of the American people. The President has a country to lead. The American people elected him to do this job, and he remains focused on fulfilling his promises to the American people. He has important work that he must continue on their behalf, both at home and around the world, including continuing strong economic growth, extending historically low levels of unemployment, negotiating trade deals, fixing our broken immigration system, lowering prescription drug prices, and addressing mass shooting violence. We hope that,in light of the many deficiencies we have identified in your proceedings, you will abandon the current invalid efforts to pursue an impeachment inquiry and join the President in focusing on the many important goals that matter to the American people.

Congressional Democrats have flouted the Constitution and all past bipartisan precedent under the guise of an "impeachment inquiry."

(Read more from “Trump White House to Democrats on Impeachment: We’re Not Cooperating, so Come and Get Us” HERE)

Giuliani: No Administration Officials Will Testify or Provide Documents to Impeachment Probe Unless Adam Schiff Is Removed as House Intel Committee Chairman

By The Blaze. Rudy Giuliani, President Donald Trump’s personal lawyer, said that he will not testify before House investigators as part of Democrats’ ongoing impeachment efforts against the president unless Rep. Adam Schiff (D-Calif.) is removed as chairman of the House Intelligence Committee, and the House votes in full on taking up the impeachment probe.

In an interview with the Washington Post published Tuesday, Giuliani said that he wouldn’t appear before the House Intelligence Committee and “can’t imagine” Trump administration officials would do so either.

“The position I’m stating is now the position of the administration,” Giuliani told the newspaper. “I wouldn’t testify in front of that committee until there is a vote of Congress and [Schiff] is removed.”

The former New York City mayor referred a soon-to-be-released letter that the Trump administration has sent to Congress regarding the legitimacy of the impeachment inquiry. Reports about such a letter broke late last week. In the letter, the White House reportedly made the argument that it doesn’t have to cooperate with impeachment probe demands until the House formally votes to launch an inquiry.

The chairmen of the three House committees that have subpoenaed Giuliani have given him until Oct. 15 to respond to them, but he says he’s ready to challenge them on the summons. (Read more from “Giuliani: No Administration Officials Will Testify or Provide Documents to Impeachment Probe Unless Adam Schiff Is Removed as House Intel Committee Chairman” HERE)

Dealership Will Give Car Buyers an American Flag, a Bible, and an AR-15
Scroll to top