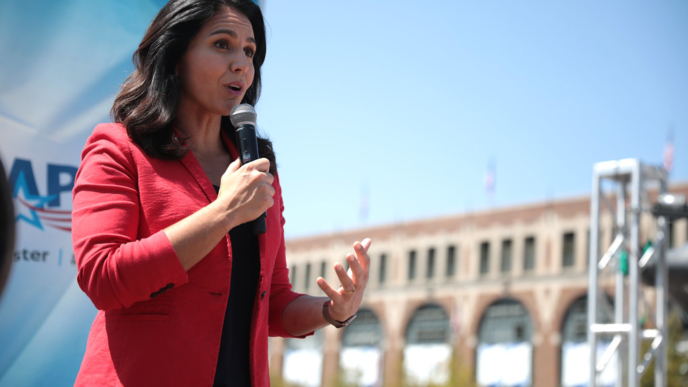 Democratic presidential candidate Tulsi Gabbard said during a Fox News interview on Thursday night that the United States government is “hiding the truth” about the September 11, 2001, terrorist attacks.

Gabbard, a Representative from Hawaii, told Tucker Carlson that she believes that the U.S. government is covering up Saudi Arabia’s role in the attacks which killed thousands of Americans.

“This story that we’re hearing from the families of those who were killed on 9/11 pushes this issue to the forefront where, for so long, leaders in our government have said, ‘well, Saudi Arabia is our great ally, they’re a partner in counterterrorism’ — turning a blind eye or completely walking away from the reality that Saudi Arabia time and again, has proven to be the opposite,” Gabbard said.

“They’re undermining our national security interests … they are the number one exporter of this Wahhabi extremist ideology,” Gabbard continued. “They’re a fertile recruiting ground for terrorists, like al Qaeda and ISIS around the world. They’re directly providing arms and assistance to al Qaeda, in places like Yemen, and in Syria.”

“And as we are seeing here, it is our government, our own government that is hiding the truth … and the many other families of those who were killed on 9/11,” Gabbard concluded. “For what? Where do the loyalties really lie?” (Read more from “Tulsi Gabbard: U.S. Government ‘Is Hiding the Truth’ About 9/11 Terror Attacks” HERE)

Video: Ron Paul says 3,000 9/11 Victims Would Still Be Alive If He Had Been President
Videos: America Remembers 9-11 Attacks – We Will Never Forget
DHS Questioned Over Decision To Let Saudi Passengers Skip Normal Passport Controls
Texas Mom Outraged After Finding Stunning Questions About 9/11, Terrorism On Her Son’s 5th Grade Test
Syrian With Direct Ties To 9/11 Hijackers Still In US, Apparently Immune From Deportation
Schools Have Been Using This Video to Teach Children That US Decisions Caused 9/11