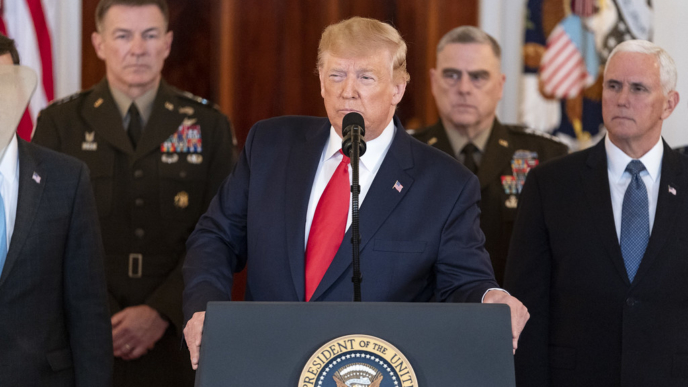 By Politico. President Donald Trump’s impeachment defense team knew they were likely to win — and they proceeded accordingly.

With a virtually negligible threat of conviction and removal by a Republican-controlled Senate, Trump’s legal team spent just a sliver of their 11-hour arguments rebutting the House’s charge that Trump abused his power by pressuring Ukraine to investigate his political rivals.

Instead, they tailored a defense that often mirrored the president’s pre-trial demands: to exact pain and revenge against his political enemies, all on the Senate floor.

What ensued was a Who’s Who of the president’s frequent Twitter targets: Obama, Comey, Mueller, Strzok, Page, Ohr — names that had little to no connection to the impeachment charges, but occupy a lot of space on Trump’s list of political enemies and whom Trump perceives as at least a part of the reason he will bear the stain of impeachment. (Read more from “Trump Gets The Impeachment Payback He Wanted” HERE)

By Daily Wire. At least three Democrat Senators are reportedly considering acquitting President Donald Trump of the charges leveled against him in the Democrats’ partisan articles of impeachment.

“Sens. Joe Manchin of West Virginia, Kyrsten Sinema of Arizona and Doug Jones of Alabama are undecided on whether to vote to remove the president from office and agonizing over where to land,” Politico reported. “It’s a decision that could have major ramifications for each senator’s legacy and political prospects — as well shape the broader political dynamic surrounding impeachment heading into the 2020 election.”

The move would give the president a bipartisan acquittal to the Democrats’ partisan charges, something that Trump is eagerly seeking.

“All three senators remain undecided after hearing arguments from the impeachment managers and Trump’s defense team. But they could end up with a creative solution,” Politico added. “One or more senators may end up splitting their votes, borrowing a move from Rep. Jared Golden (D-Maine), who voted for the abuse of power charge but against the one on obstruction of Congress.”

There appeared to be some confusion on Tuesday over a quote that Sen. Dianne Feinstein (D-CA) gave, which the LA Times reported as meaning that she was open to acquitting the president. (Read more from “At Least 3 Democrat Senators Considering Voting to Acquit Trump” HERE)

By Gregg Re. [C]ongressional Republicans are planning an aggressive “Plan B” strategy in the event some Republicans break off and demand additional witnesses in the president’s impeachment trial, Fox News has learned.

Senate Majority Leader Mitch McConnell privately said early Tuesday that he wasn’t sure there were enough Republican votes to block more witnesses, given that some moderates in the GOP’s 53-47 Senate majority were wavering. Any witness resolution would likely require four Republican defections in the Senate, because in the event of a 50-50 tie, Chief Justice John Roberts is highly likely to abstain rather than assert his debatable power to cast a tiebreaking vote.

One plan is to amend any resolution calling for a particular witness to also include a package of witnesses that assuredly wouldn’t win enough support in the Senate. For example, if the Democrats seek to call former National Security Advisor John Bolton, Republicans might seek to question Hunter Biden over his lucrative board position in Ukraine, and Rep. Adam Schiff, D-Calif., over his inconsistent statements concerning his panel’s contacts with the whistleblower at the center of the impeachment probe. (Read more about the efforts to acquit Trump HERE)

Thanks to Lisa Murkowski, McConnell Doesn’t Have Enough Votes to Prevent...
Scroll to top