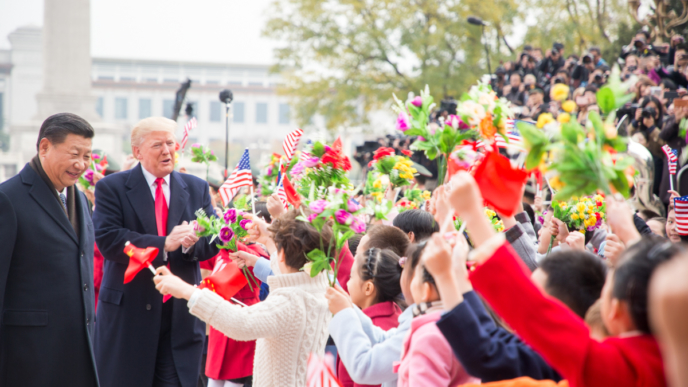 By Breitbart. President Donald Trump said Friday that China was likely delighted Democrats were trying to implement mail-in voting in the 2020 election, which he said would lead to a “catastrophic” result.

“They’re using the China virus, China must be very happy about it, because they hit us with a virus and now they screw up an election like you will never see,” Trump said about the Democrats.

The president spoke to reporters at the White House after hosting leaders of the National Association of Police Organizations on Friday to discuss law enforcement.

Trump previewed a disruptive Election Day on November 3, noting that it would take several days or even weeks to count all the ballots.

“It’s going to be a very, very sad day for this country,” Trump said. (Read more from “Donald Trump: ‘China Must Be Very Happy’ Democrats Using Coronavirus to ‘Screw up’ Election” HERE)

Mike Pompeo: AG Barr Will Determine Whether to Postpone the Election

By Law and Crime. President Donald Trump‘s baseless Thursday morning question about postponing the 2020 general election has been given new life. Secretary of State Mike Pompeo suggested the final decision on any such postponement hinges upon whether Attorney General Bill Barr and others at the U.S. Department of Justice (DOJ) can find a legal justification to change the date. . .

“You are one of the most highly trained and accomplished lawyers who are part of this administration,” Kaine summarized, “Can a president delay a presidential election?”

To which Pompeo replied:

In the end, the Department of Justice, and others, will make that legal determination. We all should want–I know you do, too, Senator Kaine–want to make sure to have an election that everyone is confident in.

“It should happen lawfully,” Pompeo said–the end of his thoughts on the matter. (Read more from “Mike Pompeo: AG Barr Will Determine Whether to Postpone the Election” HERE)

By Fox News. President Trump doubled down Friday on his warnings surrounding expanded mail-in ballots, declaring November will bring the “greatest election disaster in history” a day after he controversially suggested delaying the vote.

“They think they’re going to send hundreds of millions of ballots all over the United States and it’s gonna come out,” he told reporters at the White House following a meeting with members from the National Association of Police Organizations. “You won’t know the election result for week months, maybe years after. Maybe you’ll never know the election result. That’s what I’m concerned with – it’ll be fixed. It’ll be rigged. People oughta get smart.”

He suggested people vote in person or submit absentee ballots.

“This is going to be the greatest election disaster in history,” he continued on Friday. “And by the way, you guys like to talk to about Russia and China and other places? They’ll be able to forge ballots, they’ll forge them. They’ll do whatever they have to do.” (Read more from “Trump Doubles Down, Warns November Will Bring ‘Greatest Election Disaster in History'” HERE)

Lost common sense: How America lived through the Asian flu of 1957
Scroll to top