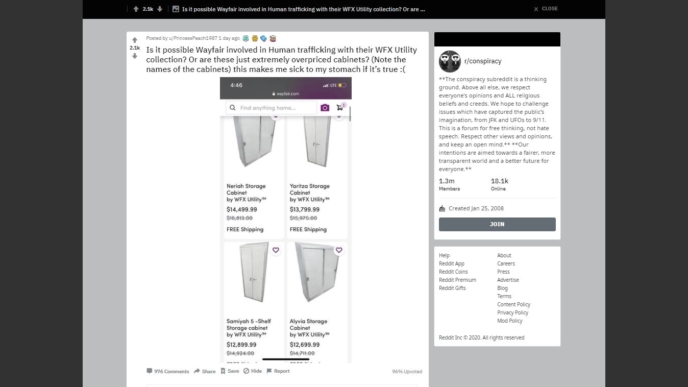 By Bruce Golding. A conspiracy theory emerged Friday that the Wayfair online store was using the sale of storage cabinets as a cover for child trafficking — which the home decor company immediately denounced as false.

A post on the social media website Reddit noted the high cost of the furniture — along with the fact that each item was identified by a female name — as potential evidence of the purported scandal, Newsweek reported.

“Is it possible Wayfair involved in Human trafficking with their WFX Utility collection? Or are these just extremely overpriced cabinets? (Note the names of the cabinets) this makes me sick to my stomach if it’s true :(,” user PrincessPeach1987 wrote Thursday.

The post quickly drew more than 700 comments from the subreddit’s 1.3 million members, including the assertion that “some of the names are missing children.” (Read more about this child sex trafficking conspiracy theory HERE)

The Person Who Started the Wayfair Conspiracy Speaks

By Andrew Whalen. The Wayfair conspiracy theory that became a social media sensation on Friday began with a post to the Conspiracy subreddit, which promotes user-submitted conspiracy theories, many thinly evidenced or unevidenced, to more than a million subscribers.

“Is it possible Wayfair involved in Human trafficking with their WFX Utility collection? Or are these just extremely overpriced cabinets? (Note the names of the cabinets) this makes me sick to my stomach if it’s true,” redditor PrincessPeach1987 posted on Thursday, alongside a screenshot from Wayfair’s mobile website featuring four storage cabinets—products named Neriah, Yaritza, Samiyah and Alyvia—that cost between $12,699.99 and $14,499.99.

In chat conversations with Newsweek . . . PrincessPeach1987, who declined to reveal their non-redditor identity, described themselves as “involved in a local organization that helps victims of human trafficking,” which has led her to be “suspicious most of the time now.” They characterized their Reddit post as less of a direct accusation and more of an effort to “see if anyone else had more details” . . .

Supporters of the theory have also urged skeptics to use a Russian search engine to search for the stock keeping unit number (SKU) associated with various Wayfair products, which returns image results full of children in bathing suits. . .

Supporters of the theory have also drawn connections to June 2019 protests by Wayfair employees, which objected to the company selling furnishings to a Texas detention facility for migrant children. The facility subsequently closed. (Read more about this child sex trafficking conspiracy theory HERE)