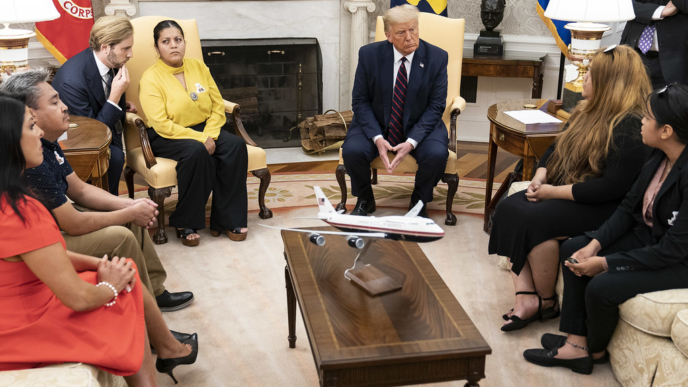 President Donald Trump met with the family of murdered US Army specialist Vanessa Guillen at the White House on Thursday and promised an investigation into her death. . .

“We’re going to look into it very powerfully. We already have started, as you know, and we’ll get to the bottom of it. Maybe things can come out that will help other people in a situation like Vanessa. We’ll be in touch with you constantly,” [President Trump said].

The Department of Justice, Department of Defence and FBI are investigating, according to Mr Trump. He also offered to help the family with funeral costs. . .

Her family claims she was sexually harassed by another soldier who is suspected of her murder. They are calling for justice and reform of the way that claims of sexual harassment are handled by the military.

The army disputes the claim and says there is no evidence of sexual harassment, but concedes that Ms Guillen may have experience other harassment. (Read more from “Vanessa Guillen: Trump Promises Murdered Soldier’s Mother Investigation Into Her Death, to Personally Pay for Daughter’s Funeral” HERE)

Lost common sense: How America lived through the Asian flu of 1957