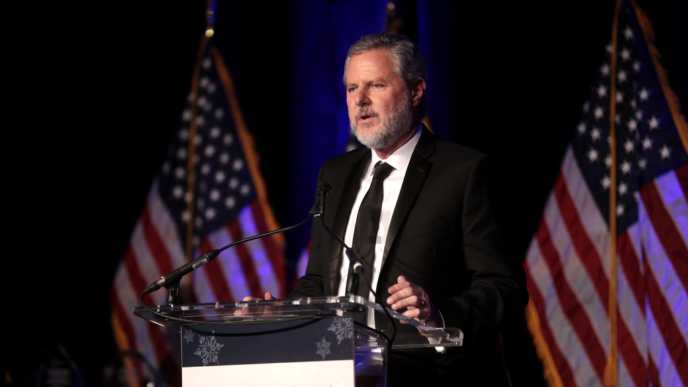 By MSN News. Falwell, a prominent supporter of President Trump, made recently made headlines and drew severe backlash from conservatives after he posted a photo on Instagram that showed him and a woman on a yacht both wearing pants that were unzipped.

Still, Falwell faced calls to resign after his apology, and his leave was announced on Friday. . .

In September, Politico published a damning exposé on Falwell’s leadership of the evangelical university, which was founded by his father, detailing a “culture of fear and self-dealing.” Falwell denied the claims in the report, telling The Hill that the FBI planned to investigate the “criminal conspiracy” behind it. (Read more from “Former Anchorage Baptist Temple Pastor Jerry Prevo Replaces Jerry Falwell, Jr. at Liberty University as Acting President” HERE)

By The Hill. Liberty University announced on Monday that it has named its chairman, Rev. Jerry Prevo, as acting president of the university after former President Jerry Falwell Jr., was placed on indefinite leave.

The Lynchburg, Va.-based school noted in its statement that Prevo has served on its board of trustees since 1996 and as chairman since 2003.

“I want to thank my fellow board members for having confidence that I could be entrusted with the responsibility of serving as the Acting President during this time of Jerry Falwell, Jr’s indefinite leave of absence,” Prevo said in a statement. “Please pray for us as well as the Falwell family as we embark on our academic year and so we may continue to be united in our common purpose and our faith in Christ.” . . .

It marked just the latest controversy for Falwell, who drew backlash at the start of the coronavirus pandemic for waiting 11 days after a Virginia state of emergency was declared to move Liberty’s classes online. Students were still allowed to remain on campus and use the dining halls at the time as well, prompting fears for student and faculty safety.

Falwell also sparked backlash by tweeting that he would refuse to wear a mask during the pandemic until there were masks with the infamous picture from Virginia Gov. Ralph Northam’s (D) yearbook depicting a man in blackface and another in Ku Klux Klan regalia. Falwell also apologized for that incident, but two of the university’s Black football players said they planned to transfer over it. (Read more from “Liberty University Names Acting President After Jerry Falwell Jr. Put on Indefinite Leave” HERE)

FBI Informant Said Michael Flynn Was Not ‘Going to Be Around Long’;...
Scroll to top