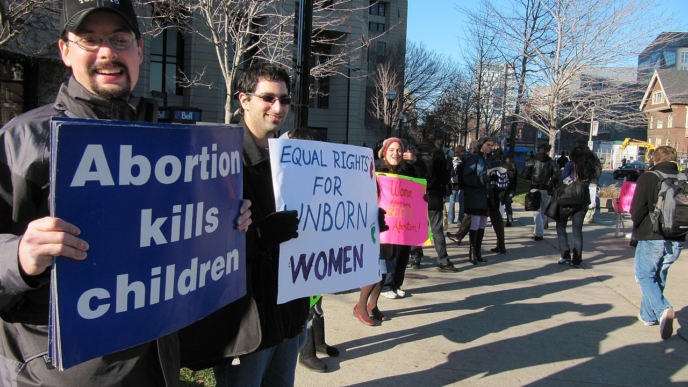 As the former Executive Director of Alaska Right to Life, I’ve had a front-row seat to the internecine “pro-life” wars that have crippled the movement for years.

It’s time to stop the madness.

Last night I saw an ad sponsored by Alaska Family Action that vilified State House Candidate Christopher Kurka, suggesting that he is an opponent of the pro-life cause. They have done the same to Representative David Eastman.

This is shameful and counter-productive. If there’s one thing I have less patience for than endless purity tests, it’s impurity tests.

I have stood with Christopher Kurka through the night during prayer vigils outside of Planned Parenthood in Anchorage. I’ve watched first-hand his tireless passion for the cause, and his zeal to see babies saved. I’ve worked with him on legislation, on petitions, on education campaigns.

I’ve been to Crisis Pregnancy Center fundraisers with him to raise money for young mothers who find themselves in difficult circumstances.

After several years as Vice President of Alaska Right to Life, Christopher followed me as Executive Director, and served on the board of National Right to Life.

I have never once doubted Christopher Kurka’s absolute and unwavering commitment to the cause of life, nor have I ever doubted his intention to end abortion on demand in America.

I have also, historically, been an ally of the Alaska Family Council, a supporter, a donor, even an employee, but the scurrilous charges being leveled against Kurka are misleading, and the message they seek to convey is false.

Nobody could plausibly deny that if the Alaska Legislature were filled with people like Christopher Kurka, abortion would be abolished in Alaska.

So, what is this all about? Strategy.

The real gripe with Kurka is that he is too pro-life. You read that right.

And the same could be said for Representative David Eastman, whom I am also happy to endorse. It is simply unacceptable for a Christian organization to attack a man for taking too strong a stand on the most consequential moral issue of our time.

Alaska Family Action wants to pursue an incremental strategy of nibbling away at the edges of Roe v. Wade and the abortion industry. The Republican Establishment, of course, loves this idea. It gives them cover. They can continue to pay lip-service at election time, and they don’t really have to vote on legislation that requires much courage or risk on their part.

Organizations like Alaska Family Action are happily given access, because they’re giving the Republican Establishment exactly what they want. They want political power. Period. That’s all.

So, the Republican Establishment is happy throw pro-lifers a bone every now and then, like once every 20 years or so, like they did with SB 49, which was subsequently overturned by the courts. The only “victory” in recent memory achieved by the incremental strategy proved hollow. It was pyrrhic victory.

The truth is: (1) the Republican power brokers, despite the party platform, do NOT want to end abortion (2) Alaska Family Action, perhaps unwittingly, is being played like a fiddle.

Christopher Kurka, on the other hand, actually wants a frontal assault on Roe v. Wade, and he’s willing to push legislation to make that happen.

Christopher Kurka’s crime? Being a conservative who actually wants to overturn Roe v. Wade, even if it costs him something.

This makes him a dangerous man to the political Establishment. Now you know why Washington DC is pouring tens of thousands of dollars into an obscure State House race in Alaska.

Coincidentally, the top targets of Alaska Family Action and Republican Establishment attacks are the same. Likely not an accident.

I wouldn’t be surprised to find out that the Washington DC Republican Establishment is funding Alaska Family Action’s attacks.

Regardless of intent, Alaska Family Action is burning their donors’ money on safe pro-life seats, proving to be little more than a front group for the Republican Establishment, creating inertia, and harming the cause.

Compromise is not a strategy. Conviction is not a weakness. And division is a dead-end road.

My former employer, Alaska Right to Life, is also engaged in a vicious campaign against Jesse Sumner. I reject these tactics as well.

If your organization carries freight with the voters, your endorsement and promotion of your chosen candidate should be sufficient.

When I was Executive Director of Alaska Right to Life during the 2012 cycle, we defeated multiple incumbents without these tactics. In fact, 21 out of our 27 endorsed candidates in that cycle won their elections.

I defy anyone in either organization to show me better results in the years since we went a different direction.

Christians engaging in vicious partisan politics actually undercuts the moral authority of our cause.

I have not always risen above this template myself, for which I am sorry. But I do recognize it as error.

We have all been damaged by the vicious cycle of the post-Murkowski write-in era.

We are enjoined by Scripture to “do good unto all men, ESPECIALLY to those who are of the household of faith.”

Let us begin again, and let it be said of us, “Behold, how they love one another!”

It’s time for pro-lifers to unite around substance, and eschew vacuous quibbles over strategies that have already proved disastrously futile.

It doesn’t have to be either/or, an all-of-the-above strategy is possible if we work together.

It’s time for pro-lifers to stop fighting each other, and stand shoulder-to-shoulder in common cause.

Christians are not called to swear fealty to the Republican Party bosses. Our first loyalty must be to God and His truth alone.

Alaska Family Council/Action and Alaska Right to Life both need to do some soul-searching and recover their respective missions.

In the meantime, I urge you to vote on Tuesday, August 18, for pro-life candidates who will actually fight to end abortion.

Fox News Host Is Shocked the Biden Campaign Isn’t Doing This Before the...
Scroll to top