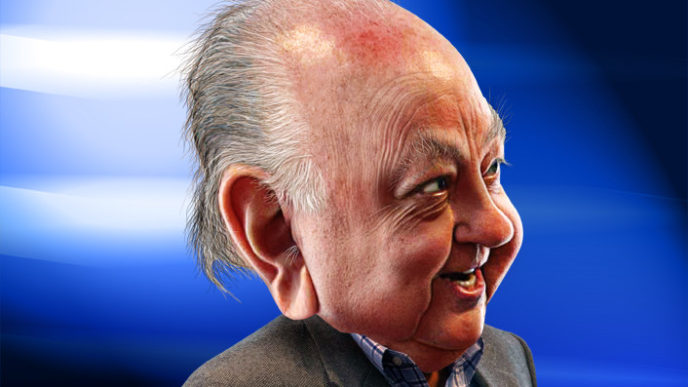 Fox News titan Roger Ailes will be leaving the network he helped build in the wake of sexual harassment allegations, his lawyer confirmed Tuesday to The New York Times. His lawyer, feminist hero Susan Estrich, said that he may keep a position with Fox Network as a consultant. The Times described his being forced out as “a humbling and startlingly swift fall from power.”

Ailes’ troubles began when long-time Fox star Gretchen Carlson sued him, claiming that she was fired after she refused his advances. Ailes denied it, calling it “a retaliatory suit for the network’s decision not to renew her contract.” Other women at the network came forward with similar stories. It was not the first time Ailes had been accused of sexual harrassment, his biographer Gabriel Sherman said. “Taken together, these stories portray Ailes as a boss who spoke openly of expecting women to perform sexual favors in exchange for job opportunities.”

“Ailes is known for having a bawdy, politically incorrect sense of humor,” CNN Money reported when she began the suit. “But Carlson’s lawsuit alleges that he went much further with her. It alleges that Ailes repeatedly ‘injected sexual and/or sexist comments’ into conversations; made ‘sexual advances by various means’; and said to her last September, ‘I think you and I should have had a sexual relationship a long time ago and then you’d be good and better and I’d be good and better.’”

At that time, the Murdochs said in an official statement, “While we have full confidence in Mr. Ailes and Mr. Doocy [a Fox News host Carlson also accused], who have served the company brilliantly for over two decades, we have commenced an internal review of the matter.”

Reports that Ailes was going to be shown the door surfaced Monday in New York Magazine. The magazine reported that owners Rupert Murdoch and his two sons had agreed to force out Ailes and were waiting till after the Republican convention. It also reported that the law firm investigating the charges is “looking into the appropriateness of Ailes’s pressuring employees to speak out on his behalf, against his accusers,” including a Business Insider article by Fox senior vice-president Neil Cavuto.

And today, another bombshell: The Kelly File host Megyn Kelly testified that she, too, had been harassed, says New York Magazine writer Gabriel Sherman. He quotes two sources briefed on Fox News’ parent company 21st Century Fox’s outside investigation of Ailes’ alleged behavior as saying that “Kelly told investigators that Ailes made unwanted sexual advances towards her about ten years ago when she was a young correspondent at Fox.” She reportedly described the harassment in detail.

Kelly’s involvement raised the stakes for Ailes and will have increased the pressure on the Murdochs to let him go. She’s become a media superstar after her debate battles with Donald Trump, the brightest presence in their prime time lineup, and the clock is ticking on her contract. Rumors are reportedly circulating that Bill O’Reilly is thinking of retiring, making Fox News even more desperate to hold onto Kelly. She is, they say, “the future of the network.”

Kelly’s silence in the wake of Gretchen Carlson’s sexual harassment lawsuit against Ailes had already drawn plenty of discussion. Now that she’s become something of a feminist icon in the wake of her battles with Trump, why didn’t she speak up in Carlson’s defense? On the other hand, Ailes has certainly helped make her a media superstar, why didn’t she join other Fox News personalities in rushing to his defense?

On Tuesday, Breitbart claimed that an inside source said, “Everyone here hates Gretchen and Megyn” and that “hosts from Fox and Friends and throughout the primetime lineup from the co-hosts of The Five to Special Report’s Bret Baier to Greta Van Susteren to Bill O’Reilly, Shepard Smith and Sean Hannity are planning to band together and potentially execute contract clauses that allow them to leave if Ailes is driven out.”

As for the report that the decision has already been made to give Ailes the boot: “This matter is not yet resolved and the review is not concluded,” the Murdochs’ official statement said. (For more from the author of “Ailes Bails — Exits Fox News in Wake of Sexual Harassment Allegations” please click HERE)

POOR, INNOCENT, NAIVE SHEPARD SMITH: Completely Clueless as to Why Cops Are...
Scroll to top