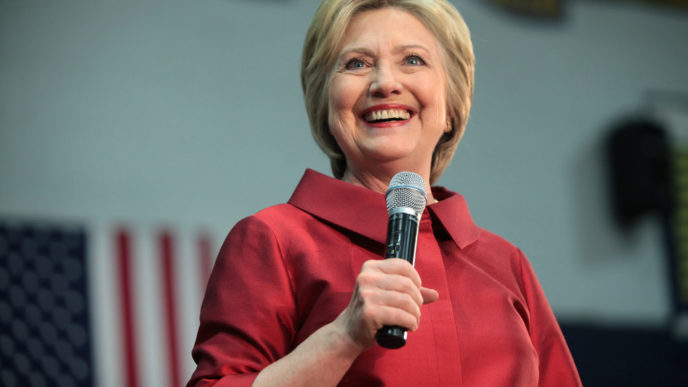 When a Clinton Foundation executive wanted diplomatic passports for himself and an associate back in July 2009, all it took was one email to get a reply from top Hillary Clinton aide Huma Abedin saying, “Ok will figure it out.”

The email was among 510 pages of new State Department documents that were released by Judicial Watch as it continues its investigation into the Hillary Clinton-era State Department, its links to the Clinton Foundation, and the use of a private email server by Clinton while she was secretary of state.

“The idea that the State Department would even consider a diplomatic passport for Clinton Foundation executives is beyond belief,” stated Judicial Watch President Tom Fitton.

“These emails show various violations of national security laws and ethics rules and further confirm that Hillary and Bill Clinton are personally implicated in the Clinton Foundation pay to play scandal,” he said.

According to a press release issued by Judicial Watch, the request by Clinton Foundation executive Doug Band was for a special diplomatic passport for himself and his associates – an unidentified “JD” and apparently Justin Cooper, who Judicial Watch described as “formerly a key member of Bill Clinton’s personal office.”

The exchange of emails, as released by Judicial Watch, went like this:

From Band to Abedin:

Need get me/ justy and jd dip passports.

We had them years ago but they lapsed and we didn’t bother getting them.

Ok will figure it out

Judicial Watch’s release notes, “The U.S. Code of Federal Regulations strictly limits the granting of diplomatic passports to members of the Foreign Service, their family members, or those working on U.S. government contracts.”

The Clinton campaign said in response that the diplomatic passports were needed as part of an effort to free American journalists held by North Korea.

The Judicial Watch press release also said that among the emails it found are some in which Hillary Clinton forwarded classified information to Abedin’s unsecured, non-state.gov account.

“The emails also show Bill Clinton sought a meeting with Mrs. Clinton for a major Clinton donor with State Department officials and Hillary Clinton herself pushed for a joint event with the Clinton Global Initiative,” the release stated, adding that Band received special help from Abedin for Clinton Foundation donor Chris Ruddy.

Another of the newly released emails finds the Clinton State Department granting special favors to Andrew Liveris, CEO of Dow Chemical, which donated between $1 million and $5 million to the Clinton Foundation.

Wjc wants to be sure hrc sees Andrew Liveris, ceo of dow tomorrow night. Apparently he is head of us china business council. Is he definitely going to be there?

Lona, I have arranged this pull aside for on the arrival in the Hold Room across the hall from the ballroom, immediately prior to the Secretary’s entrance and remarks.

Judicial Watch said the new documents include 37 Clinton email exchanges not previously handed over to the State Department, bringing the total to 228.

“These records further appear to contradict statements by Clinton that, ‘as far as she knew,’ all of her government emails were turned over to the State Department,” Judicial watch said. (For more from the author of “Email Reveals Clinton Foundation Execs Demanding Diplomatic Passports From Top Hillary Aide” please click HERE)