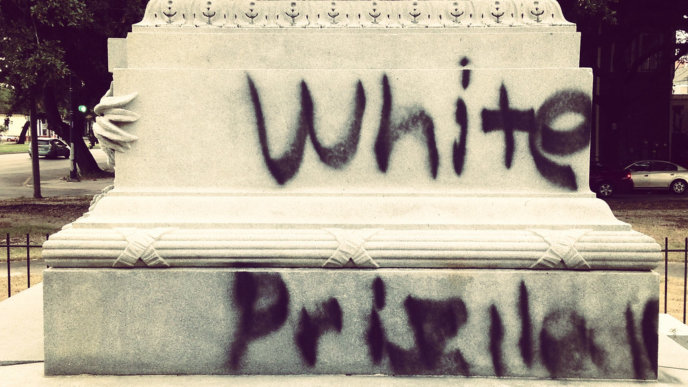 There was a ritual when we came in from the boondocks to visit my grandma in her adopted Midwestern city. Before we got out of the driveway and entered the house, weather permitting, she took my dad on a walk to show him all the improvements she’d made since his last visit. She described the projects in detail as her youngest son dutifully complimented all her handiwork.

She was in the habit of using the first-person singular, as in “I built this fence” or “I moved this tree because it was starting to shade my garden.” She had a husband and, believe you me, she got a day’s work out of him. So we all understood that she meant “we” built this or that.

But Grandpa couldn’t resist hamming it up, staring in fake amazement at his outstretched hands and telling us for the umpteenth time that he couldn’t figure out how she did all the work, and he got all the callouses.

The time has come to add my voice to the chorus of recent complaints against white privilege. You might have noticed that most of the complaints thus far have been vague and theoretical, even speculative. But mine is practical, immediate and vivid: white privilege is killing my back!

As a cisgendered patriarchal white male, I’m so privileged that sometimes I don’t want to get out of bed in the morning. (Note to privileged white males: Absorbine helps some.) I don’t really have a choice, so I still get up and go to work. But if I weren’t so dang privileged, I’d stay home and binge-watch Hulu re-runs.

Sometimes it’s the little bones in my hands, but usually it’s my back. When I get in a hurry or I forget to put on my work gloves, sometimes I tear my fingernails. White privilege is sneaky. It comes at you from a dozen different directions.

When I first entered the workforce nearly 50 years ago, we didn’t know about white privilege. But there was talk of “economic justice” and “redistribution of income.” I was an ultra-liberal George McGovern supporter, and that all sounded pretty good to me.

Like other people of my generation, I thought it was self-evident that I deserved more money. I hadn’t heard the apocryphal Willie Sutton quote that banks are where the money is, and I assumed money comes from the government. Where and how the government gets its money was a matter of supreme indifference to me.

They should tax the dickens out of the greedy exploiters and overpaid bourgeois, and cut checks to us, the deserving. It’s not that complicated. If a government can’t do that, what good is it?

Then I went to work on the Trans-Alaska Pipeline construction project: 12-15 hours per day, seven days per week, sleeping in camps, eating on our work buses. We went weeks at a time without seeing a town or a television. I thought the Bee Gees singing falsetto on my eight-track were a Black female trio because I’d never seen them on TV or in a magazine.

I was a local-hire Alaskan laborer supporting itinerant welders, mostly from Texas, Oklahoma and Arkansas. The pay was lavish by the standards of that decade, and word got out via news stories and word of mouth. Seattle and Vancouver young women perked right up and paid attention when you mentioned you were working on the Alaska pipeline project.

The Internal Revenue Service was on top of the situation, too. Alaska has no state income tax, but the stiff federal tax deductions from my pipeline paychecks in those pre-Reagan years, when I filed single with zero dependents and minimal deductions, were a weekly discouragement. Still, I was pulling down the biggest money I would ever make, barely old enough to enter a bar.

It was great to be making that kind of money at the beginning of my working life, but it was still the Alaskan wilderness and the Arctic climate. I worked mostly in the Brooks Range, which is the northernmost mountain range before the Arctic Ocean.

While we were working on the line one morning, a grizzly bear got on our work bus and tore open our lunches and donuts. The Texans and Okies were trying to get snapshots of the beast when it came off the bus. The Alaskans, who know their grizzlies, were climbing on top of the other buses, and locking themselves in truck cabs.

In winter, the welders went home or to warmer out-of-state pipeline projects to wait out Alaskan temperatures of 50 and 60 degrees below zero, round-the-clock darkness and occasional knifelike wind. I will say this: they missed some truly spectacular Northern Lights in the winter. Most of the laborers went back to town after the welders left, but I worked camp security 11.5 hours per day through the winter.

This was shortly after Richard Nixon left office. Because the pipeline crossed federal lands, Affirmative Action was in force. There were two job lines at the union hall: the long one, sometimes stretching out the door and onto the sidewalk, and the short one.

The short line was for racial minorities and (very rare) women, legally entitled to hiring preference. I seldom saw the number of workers in that line amount to double digits. For them, hiring was almost instantaneous and they had first pick of the choicest assignments.

The long line was for us, the white males whom Professor Anita Hill would later call “the lowest form of life on the evolutionary scale.” Sometimes our line was so long that we couldn’t get a job after wasting our day at the hiring hall, and we had to come back the next day and the next. Minority union members could quit a job in the morning and be back on a job that afternoon.

Even in town, most of the pipeline laborers were alone, without family, unconnected to the community. We tended to run with fellow unemployed workers until we could get dispatched to a remote pipeline camp. We’d usually see our friends at the union hall, and either go our separate ways for work or continue socializing in town.

Two middle-aged pals there were inseparable. One was Black, and the other was a white guy with a German name. They were loud and profane, apparently hit the bottle pretty good, and they were a lot of fun in the union hall. But they couldn’t stand in the same line because one was a racial minority and the other wasn’t.

They didn’t want to split up to ship out to different pipeline camps, but the Black friend didn’t want to accept the inferior jobs that would remain after the minority job dispatch. So he loudly told his white friend to tell the union that his mother was Mexican. We all laughed because this guy looked like a pedigreed Scandinavian.

But he went inside the office, and when he came back out, he got in the minority line and took a prime job dispatch with his Black buddy. Good for him, I say. We owe no loyalty to that corrupt racist system. But I never got to stand in that line.

I visited my lamentably white grandparents, who were wintering in Florida. St. Petersburg was well known for its large population of elderly retirees, but I didn’t know there was also a large youthful lower-class community with all the usual pathologies. I saw large numbers of young men my age standing around, “smoking and joking” on weekday afternoons. Employment was apparently not on the agenda.

On the first day of the month, welfare checks came out and young men found their way to women who were able to bankroll their frolics for a few days thereafter. I learned that the slang for that first day, the welfare day, was “Mothers’ Day.” Liquor flowed, sirens whooped, and skirts and music volume were elevated for a few days, until the government money for that month ran out.

I don’t remember a strong feeling of moral censure, but I was acutely aware that all this fun was literally at my expense, and the expense of other hapless working men and women. I was single and ready to mingle, but I opted instead for deferred gratification, to work in remote isolation, to make that money while I could. Why did I have to go in my pocket to fund uproarious living by frivolous and idle people?

Talk of redistribution of income began to ring hollow. Economic justice, it seemed to me, ought to consist of more than redistribution of my income. How about redistributing some of that 60-below-zero? They [were] welcome to frozen fingertips. How could we redistribute my solitude, my social isolation, my sleep deprivation?

The truth, of course, is that all the risks, costs, sacrifices and rewards are distributed efficiently, which is to say perfectly, by a free market. Freedom begets freedom. What a privilege to turn 21 in a relatively free country before parasites and race hustlers zeroed in on productive, innovative, risk-taking, hard-working opportunity seekers. I wish I could privilege my grandchildren with such a country.