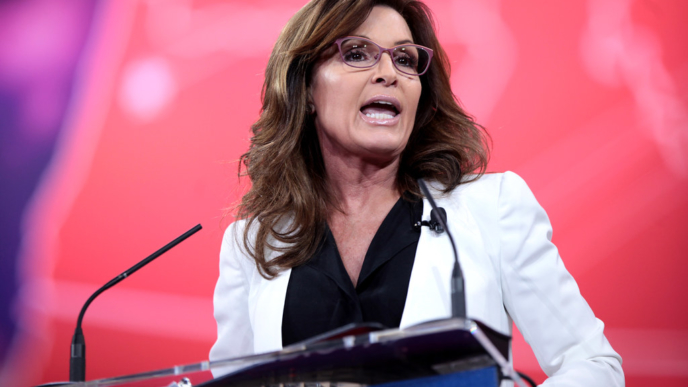 By Matt Johnson. Alaska’s Special Congressional Election has been called for Democrat Mary Peltola, who reportedly edged former Governor Sarah Palin by the slimmest of margins in Round 2 of the Ranked Choice vote (RCV) count.

RCV is working exactly as planned, as Alaska is now completely dependent on the “integrity” of the new Dominion Voting Machines purchased by the Dunleavy Administration in 2020.

This means that One-third of Establishment Republican Nick Begich’s supporters suicide voted by ranking Peltola ahead of Palin on their Special General Election ballot. A clear sign that they hate Palin more than they love their country.

Peltola was the first-choice vote of just 39.66% of voters in the Special General Election.

The makeup of the electorate, though, raises serious questions about the legitimacy of the outcome.

While it is only possible to gauge the Alaskan electorate with proximate accuracy, given the disproportionate number of undeclared and nonpartisan registrations, polling seems to suggest the turnout was disproportionately left-leaning relative to voter registrations and voter intensity.

While we can’t identify party allegiances, we can identify how most voters actually vote.

While there are a few minor parties, mostly right-leaning, all things being equal a general election under RCV with two Republicans and one Democrat would be decided by an electorate that is in simplified short-hand 40% Republican, 40% Independent, and 20% Democrat.

This means for Peltola to receive nearly 40%, she had to win more than 50% of the Independent voters. This assumes equal turnout among Republicans and Democrats.

Why is this a heavy lift?

1. Peltola was a late entry to the Special Election, which was already on a truncated schedule.

2. Peltola is not a household name, and it is doubtful that half of the electorate knows who she is outside of the Alaska Native community.

3. Polling over the last several months has indicated a strong and decisive edge to Republicans in voter intensity that exceeds intensity during Republican wave cycles in 1994, 2010, and 2014, ranging anywhere from 10-22 points higher than Democrat intensity. This means turnout should’ve favored Republicans by a wide margin.

4. One poll taken back in March even showed Independents favoring Republicans in Alaska by 13 points.

5. Peltola is a sure vote for Nancy Pelosi in the midst of one of the most troubled economic environments in 40 years.

6. All things being equal, which they are not in the State of Alaska, midterm Congressional elections almost always advantage the party out of power.

Even if DOE numbers are taken at face value, Republican turnout exceeded Democrat turnout by more than 18 points, yet Alaska is faced with the prospect of being represented by a liberal Democrat in Congress.

How do we know this count is accurate? I guess we’ll just have to trust Dominion Voting Systems. But don’t ask any questions. It’s strictly verboten.

By Townhall. For the first time since 1973, Alaska’s at-large U.S. House seat will be occupied by a Democrat after Mary Peltola prevailed in the second round vote tabulation of the special general election held to fill the vacancy created after GOP Rep. Don Young passed away earlier this year.

In the first round, Peltola held a lead after Republicans split their votes between former Alaska Governor Sarah Palin (finishing second) and Nick Begich. Under Alaska’s new ranked-choice voting system narrowly approved by voters in 2020, the last place candidate (Begich) was eliminated and his votes reallocated to his supporters’ second-choice candidates.

Democrat Mary Peltola (@MaryPeltola) is the winner of the AK-At Large special election.

Ultimately, according to data broadcast by the Alaska Division of Elections on Wednesday evening, round two saw 27,042 votes added to Palin’s total and 15,445 for Peltola while 11,222 Begich voters didn’t list secondary choices. In the end, Begich’s second-round votes gave Peltola a win with 51.47 percent of the votes over Palin’s 48.53 percent. (Read more from “Alaska’s Ranked-Choice Voting Hands Democrat Victory Over Sarah Palin” HERE)

LEFT-LEANING MEDIA OUTLETS WILL MAKE IT POSSIBLE FOR YOU TO READ PALIN’S E-MAILS
Rush Limbaugh – Sarah Palin Has The Media Going To The Bathroom On The Side Of The Road
Fearing Sarah Palin
L.A. Times Attacks Palin Because She Isn’t a Thief, Liar, Pervert or Criminal
Parody: The ULTIMATE SARAH PALIN is Dumb Video
Sarah Palin – McConnell Plan ‘Makes No Sense,’ Hands Obama Budget With ‘White Flag’