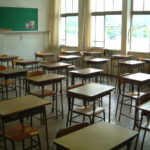 A Tennessee high school teacher was suspended Thursday after students reported to school officials last week that they were shown an “inappropriate film” in class.

“Upon learning of an alleged movie viewing, the district immediately launched an internal investigation regarding the alleged viewing of an inappropriate film at Jackson Central-Merry High School,” the press release said. “This investigation is ongoing. At the time the incident was reported, the teacher was immediately suspended and remains suspended pending the outcome of the investigation.” (Read more from “Tennessee High School Teacher Suspended for Showing This Movie in Class” HERE)