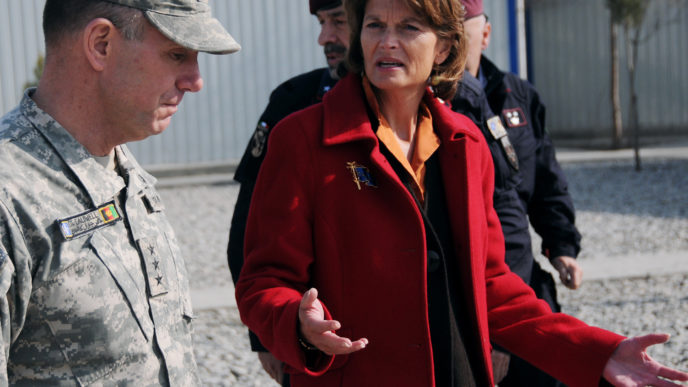 “Senator @lisamurkowski of the Great State of Alaska really let the Republicans, and our country, down yesterday. Too bad!” Trump tweeted Wednesday morning.

Senator @lisamurkowski of the Great State of Alaska really let the Republicans, and our country, down yesterday. Too bad!

Murkowski and one other Republican senator, Susan Collins of Maine, were the only GOP senators to vote with Democrats against a procedural measure to begin debate on the GOP’s proposed health care legislation.

Eight other Republicans joined Murkowski in a later vote against an amendment that would have repealed and replaced portions of Obamacare.

Republicans are utilizing a process known as reconciliation in their attempt to pass health care reform legislation, which allows most amendments to pass with only 50 votes.

However, the amendment Murkowski voted against Tuesday night required 60 votes since portions of it have not yet been scored by the Congressional Budget Office.

In response to Trump’s criticism, Murkowski said Wednesday that she is not concerned about the president damaging her prospects for reelection.

“Quite honestly, I don’t think it’s wise to be operating on a daily basis thinking about what, a statement or a response, that causes you to be fearful of your electoral prospects,” Murkowski said.

The Alaska Republican suggested that politicians should concern themselves with governing instead of always worrying about their reelection chances.

“Every day shouldn’t be about winning elections,” she said.

“How about just doing a little bit of governing around here? That’s what I’m here for.”

The Senate will consider other health care-related amendments prior to its August recess. (For more from the author of “Trump Says Lisa Murkowski ‘Really Let America Down'” please click HERE)

Charlie Gard Will Likely Be Forced Into Hospice Tomorrow to Die, Not Allowed...

Utah Man Killed Wife on Alaska Cruise Because ‘She Would Not Stop Laughing’...
Scroll to top