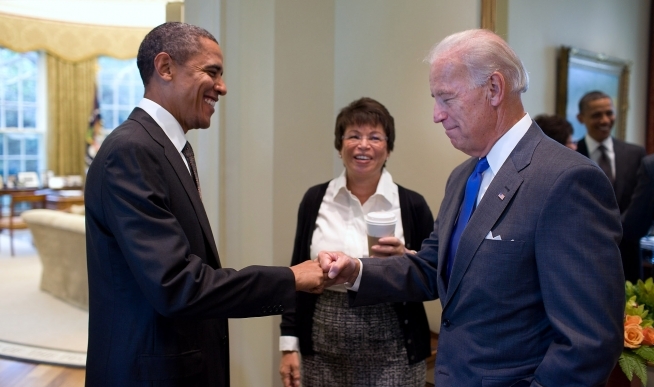 By Washington Examiner. Vice President Joe Biden is reportedly upset that his former boss, Barack Obama, has been talking to other Democrats about a 2020 run for president.

Earlier this month, the Washington Post reported that Rep. Beto O’Rourke, who recently lost to Sen. Ted Cruz in their Texas midterm election contest, met with former President Obama last month as he considers his own White House bid.

According to insiders who spoke to Vanity Fair, word that Obama is speaking to potential Democratic contenders has miffed Biden, 76, who has privately been considering a campaign of his own against President Trump. . .

“If Obama is playing footsie with people now, it creates tension,” said an adviser who works for a potential 2020 Democratic presidential candidate. “And it gets you some media attention and maybe some staffing. But actual voters? Obama himself has always been popular with Democrats, but I’ve never seen his popularity be transferrable to someone else.” (Read more from “Joe Biden Feels Stung as Obama Plays ‘Footsie’ With Other Democrats Eyeing 2020 Bid” HERE)

The former Democratic candidate, who took on Sen. Ted Cruz, R-Texas, in the 2018 midterms, met with the former president in his offices in Foggy Bottom Nov. 16, according to a Washington Post report.

O’Rourke became a popular candidate in Hollywood among celebrities such as singer Beyonce, basketball star LeBron James, and talk show host Ellen DeGeneres, in an attempt to turn Texas blue. . .

Sources close to the O’Rourke campaign told the Post that Obama offered several times to help the campaign, including traveling to Texas for a rally or recording a robo-call offering his endorsement. . .

“I don’t think we’re interested [in an endorsement],” O’Rourke said after a town hall at a local high school. “I am so grateful to him for his service, he’s going to go down as one of the greatest presidents. And yet, this [election] is on Texas.” (Read more from “Beto O’Rourke Meets With Obama Amid Speculation of 2020 Presidential Run” HERE)

Ocasio-Cortez Must Have Missed Sunday School Because Even Her Account of Jesus’...

ICE Released Hundreds of Migrants in THIS State Before Christmas — and Is...
Scroll to top