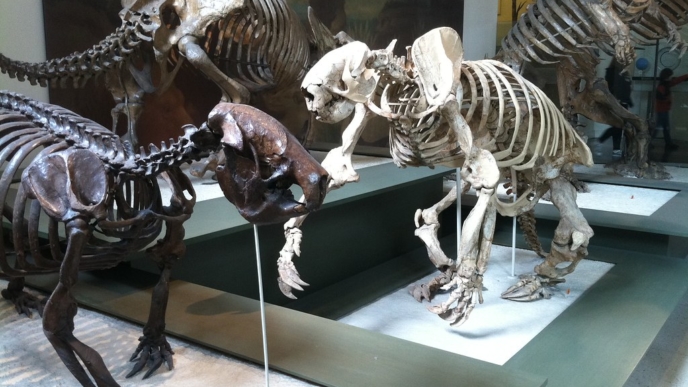 By Scientific American. . .Fossilization is a fairly rare occurrence to start with. Most lives that ever have been lived left no record of their existence or passing. So when paleontologists come across dense pockets of bone, representing not just one animal but many, how such an ancient treasure trove was assembled is one of the core threads that we can pull on to unravel the mystery of a time long gone. So it is with a massive accumulation of sloths found in Santa Elena, Ecuador.

The site, called Tanque Loma, has just gotten a detailed description from paleontologist Emily Lindsey and colleagues. It’s a fantastically-rich Ice Age bonebed, containing the remains of at least 22 individual Eremotherium laurillardi – one of the largest of the giant ground sloths. What’s more, the bones are entombed in sediment rich in asphalt and the mashed-up plant material found at the site are the sloth’s feces, gut contents, or both. So how did so many sloths wind up buried in the same spot?

First, the asphalt is something of a red herring. This place wasn’t a sticky trap like the famous La Brea asphalt seeps in Los Angeles. Instead, the bonebed was created in a watery environment that was later infiltrated by asphalt. Digging deeper, Lindsey and coauthors write, Tanque Loma was “a low-energy, anoxic, marshy aquatic environment” that sometimes went dry for long enough to let terrestrial plants to grow there. And this backdrop may hold the key to what befell the sloths. . .

But why at this place, and why so many? There are other bonebeds near Tanque Loma, but none contain Eremotherium in such great abundance. And bonebeds like this can form in very different ways. Perhaps the sloths stuck around a dried-up watering hole too long. Maybe some local catastrophe killed a whole bunch of the sloths at once. Maybe this place took victims over time, with mud or some other trapping mechanism preventing sloth after sloth from escaping. Or perhaps ancient humans with a hunger for sloths created this site. (Read more from “Paleontologists Dig Into a Giant Sloth Boneyard” HERE)

By Nature. . .The team found that the animals ranged from juveniles to full-grown adults, hinting that these Ice Age behemoths might have travelled in herds. The site, which has been carbon dated to roughly 18,000 to 23,000 years ago, features copious remains of the beasts’ digested food.

Ground sloths found at other fossil sites died after becoming mired in asphalt seeps. But the authors hypothesize that the Tanque Loma animals might have been gathered in a drying waterhole — as modern-day hippopotamuses do — when they perished of thirst or disease. (Read more from “A Bone Bed Reveals Mass Death of Herd of Giant Ground Sloths” HERE) 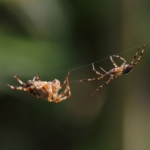