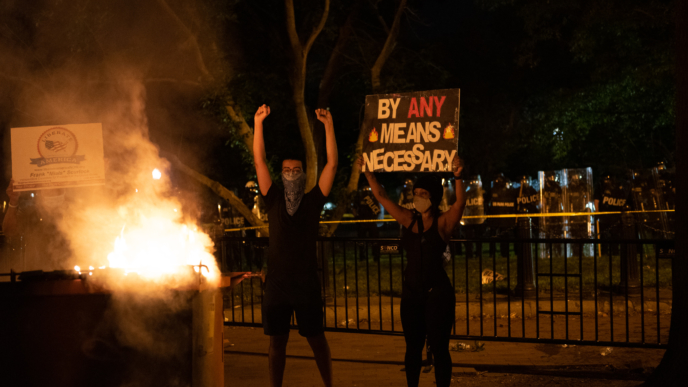 By Townhall. The mayhem in D.C., it seems, began in full force at Lafayette Park, not far from the White House. Demonstrators jumped the gated barrier, forcing park police to move forward and try to push individuals back.

BREAKING. Some protesters have jumped the gated barrier at Lafayette Park. US Park Police push them back. The White House is behind the US Park Police l & the Secret Service. @MSNBC @nbcwashington #GeorgeFloyd pic.twitter.com/RzJgnvv7Vq

The night only devolved from there. One of the most devastating scenes of destruction in D.C. has to be the fire at St. John’s Episcopal Church on H Street, which has stood in D.C. since 1816. Just how historic is it? Every president since James Madison has worshipped there at some point. It was designated a National Historic Landmark in 1960. But rioters, it appears, lit the church on fire Sunday, and the inferno was captured on camera by Fox News reporter Kevin Corke.

Historic St. John's Church across Lafayette Square from the White House has been set ablaze by rioters tonight pic.twitter.com/CDvMGjtnQM

It’s such a beautiful landmark… This breaks my ❤️ pic.twitter.com/lP2HcKWTiX

By New York Post. President Trump on Monday invoked a law from 1807 allowing him to send military forces to states rocked by unrest over the death of George Floyd in a sudden White House Rose Garden address interrupted by the sounds of protestors being cleared out by police nearby.

“We cannot allow the righteous cries of peaceful protesters to be drowned out by an angry mob,” Trump said, declaring himself the “president of law and order” while blaming extremist groups such as Antifa for the unrest.

“I am mobilizing all available federal resources, civilian and military, to stop rioting and looting, to end the destruction,” he said, immediately mobilizing the Insurrection Act of 1807, which allows him to deploy troops anywhere across the nation.

It was last used in 1992, by President George H.W. Bush to quell the LA riots, which were sparked by the police beating of Rodney King.

“If a city or state refuses to take the actions that are necessary to defend the life and property of their residents, then I will deploy the United States military and quickly solve the problem for them,” Trump said of the act. (Read more from “Trump Mobilizes U.S. Military to End Unprecedented Riots” HERE)

By Breitbart. The Pentagon has ordered the 82nd Airborne Division’s Immediate Response Force to deploy to the D.C.-area amid rioting across the nation, according to multiple sources on background.

The force is the same one that deployed earlier this year to quell violent Iran-backed protests in Iraq. Sources told Breitbart News earlier on Monday that the forces were preparing their gear to deploy, but Pentagon officials would not confirm.

A source also told Breitbart News that the 16th Military Police Brigade from Fort Bragg was also headed to D.C.

The deployments to D.C. comes after rioters looted stores, defaced national monuments, and burned a historic church a block from the White House.

Trump during a press conference on Monday announced he was dispatching military units in response to the riots.

And, if necessary, the 10th Mountain, 82nd Airborne, 1st Cav, 3rd Infantry—whatever it takes to restore order. No quarter for insurrectionists, anarchists, rioters, and looters. https://t.co/OnNJmnDrYM

Trucker Attacked by Mob on I-35 Was Delivering Fuel to Black-Owned Business...
Scroll to top