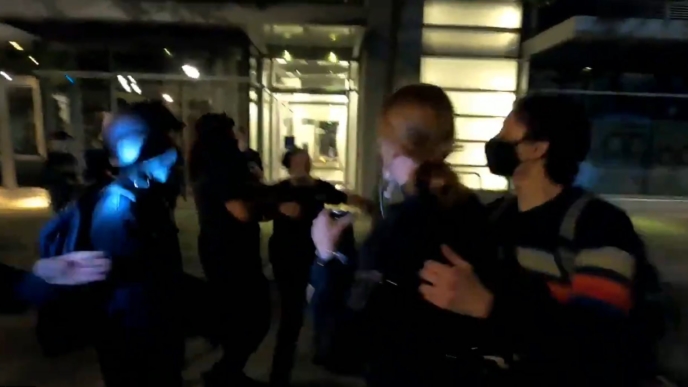 A militant in Portland, Oregon — apparently a woman — was caught on video punching an elderly man in the face while an accompanying left-wing mob was harassing and ganging up on him. . .

Photojournalist Alex Milan Tracy posted video of the attack on Twitter early Monday morning and wrote that the victim reportedly said “f*** black lives” as he was surrounded behind the Justice Center, where rioters have been attacking police and destroying property seemingly on a nightly basis for some time.

There is no audible utterance of “f*** black lives” on the clip, however.

Instead it shows the man, sporting a white facial hair, arguing with leftist militants in the street. . .

When he catches up to his bike, the elderly man keeps arguing with the mob while the leftist militant who dragged his bike away walks right up and punches him in the face, staggering him backward.

Confrontation continues as people create space for the man to leave. pic.twitter.com/0rRaMVGEIX

(Read more from “Militants Gang up on Elderly Man, Then One of Them — Apparently a Woman — Punches Him in Face (VIDEO)” HERE)

Governor John Kitzhaber Announces His Resignation
Oregon House Passes Bill to Charge Teen's Abortion to Parents' Insurance Without Them Knowing
Revealed: The Chilling Message the Oregon Shooter Who Supposedly Singled Out Christians, Reportedly Posted Online Before the…
Here's Why the Army Vet Shot 7 Times Is Being Hailed a Hero in Oregon Massacre
Must-Read Open Letter: To the Moms Whose Children Were Killed in Oregon for Being Christians
Oregon Politician Tells Whole Country What It Should Do After Shooting - Obama Didn't Get the Message