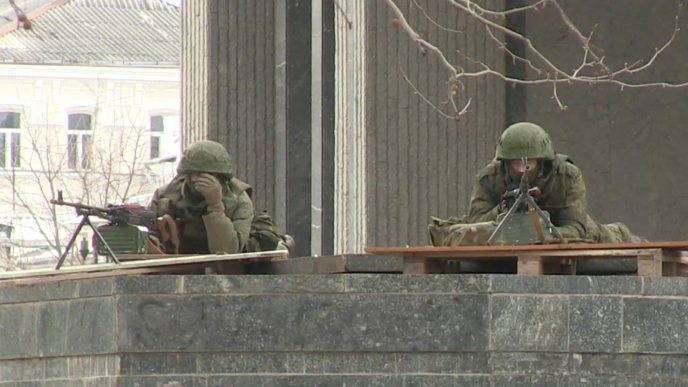 The United States is monitoring allegations that Ukrainian soldiers allegedly executed Russian troops in a video posted on social media that has both sides accusing the other of war crimes.

Four videos posted on social media last week appear to show the killing of 11 Russian soldiers as Ukrainian forces recaptured the village of Makiivka in the Luhansk region in mid-November, according to the New York Times. There are gaps missing in the videos, and it’s unclear why, though the New York Times used other videos to understand what occurred.

In one of the videos, a Ukrainian soldier is filming, and he quickly flashes the camera to himself and another soldier lying on his stomach pointing a rifle, while a third armed soldier can be seen walking backward with his rifle pointed at a destroyed outhouse where Russian soldiers appeared to be hiding. Gunfire can be heard, but it’s unclear who is firing at whom. The clip cuts, and in the same area where the soldier backtracked, six Russian soldiers are laying on their stomachs, while four more come out with their hands up. . .

An aerial video the New York Times viewed showed the aftermath of the surprise attack. The gunman appeared to be dead near the spot he opened fire, while the soldiers who had been laying on their stomachs also appeared to be dead, shot in the head. . .

“We are obviously tracking that quite closely. It’s really important to emphasize that the laws of war apply to all parties equally, both the aggressor state and the defender state, and this is in equal measure,” Beth Van Schaack, U.S. ambassador-at-large for global criminal justice, told reporters on Monday. “But when it comes to the war in Ukraine, that’s really where the equivalency ends. When we’re looking at the sheer scale of criminality exhibited by Russian forces, it’s enormous compared to the allegations that we have seen against Ukrainian forces.” (Read more from “US ‘Tracking’ Clip May Show Ukrainians Executing Russian Troops” HERE)