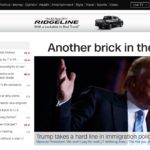 CNN has issued an apology for playing Pink’s “Stupid Girls” before a story on former Alaska Governor Sarah Palin’s support for fast-food restaurant Chick-fil-A and its homophobic president Dan Cathy.

In what is known in the broadcasting industry as a ‘bumper,’ CNN played part of Pink’s 2006 hit “Stupid Girls” before a Sunday morning segment about Palin and her husband dining at a Chick-fil-A restaurant in Texas.

“Sarah Palin is apparently hungry for chicken and controversy,” CNN hard news anchor Randy Kaye said, segueing into the story about how the 2008 Republican vice presidential nominee not only ate at Chick-fil-A but posted about her visit on Twitter and Facebook as well.

“Stopped by a Chick-fil-A in The Woodlands to support a great business,” Palin tweeted.

CNN has since apologized for what it called a “poor choice” of music, but the network denied intentionally linking “Stupid Girls” to Sarah Palin.

Publisher’s note:  Good luck finding the CNN apology on its web site.  At the time of this posting, the story is nowhere to be found.  Also, if you haven’t seen the CNN segment introducing the Palin story with “Stupid Girl”, here it is here:

LEFT-LEANING MEDIA OUTLETS WILL MAKE IT POSSIBLE FOR YOU TO READ PALIN’S E-MAILS
Rush Limbaugh - Sarah Palin Has The Media Going To The Bathroom On The Side Of The…
Fearing Sarah Palin
L.A. Times Attacks Palin Because She Isn’t a Thief, Liar, Pervert or Criminal
Parody: The ULTIMATE SARAH PALIN is Dumb Video
Sarah Palin - McConnell Plan 'Makes No Sense,' Hands Obama Budget With 'White Flag'